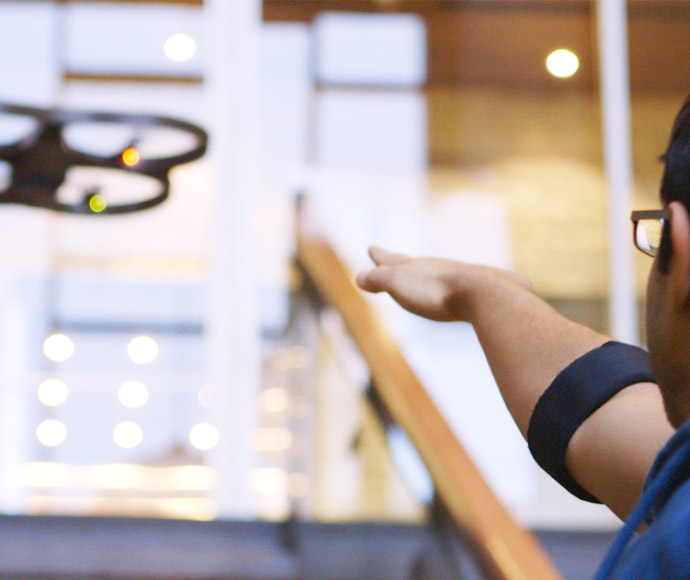 Get ready to unleash your inner Jedi.

The band is called MYO. The electrodes in the device pick up on electrical activity in your muscles. Combined with motion sensors, that means MYO can tell what gestures you are making with your hand. The first version of the product recognizes around 20 gestures, from hand waves down to slight movements of individual fingers, and you connect it to your computer, phone, or other devices through Bluetooth 4.0 Low Energy.

“There is a trend towards more tightly integrating technology with who we are as people,” said founder Stephen Lake in an interview with VentureBeat. “How can you make technology an extension of yourself? By making it something that is naturally integrated with you all the time. Our hands have evolved over millions of years to have incredible control and manipulate things. Now we are connecting natural sets of actions to the digital world. Suddenly, you have the power of the entire internet at your fingertips.”

Thalmic is participating in Y Combinator’s winter 2013 class. Although this prestigious accelerator program is most known for its portfolio of software companies, hardware is a growing area of interest. On Saturday, Y Combinator held its first “hardware hackathon” where participants design, hack, and improve hardware of all kinds. 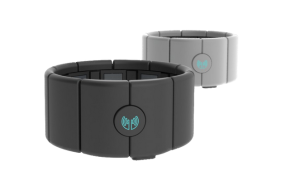 Hardware is a hot topic within the technology community right now. The quantified self-movement and connected devices for your body and your home (such as FitBit, Pebble, Lockitron, and Nest) are exploding in popularity with both consumers and investors. Furthermore, technological advancements such as 3D printing, new funding platforms such as Kickstarter, and organizations dedicated to nurturing hardware companies such as Tech Shop and Lemnos Labs have made it easier than ever before to bring a hardware product to market.

Leap Motion’s controller is perhaps the most well-known gesture-control gadget out there right now. This small rectangular device lets users control their computer “in three dimensions” using their hand and finger movements, combined with Leap Motion’s software. Leap has raised $44 million to date from big name investors and signed deals with Asus and Best Buy to support mainstream distribution. It hasn’t set an official release date for Leap Motion’s controller, but it will cost $70 when it launches this spring. MYO is available for preorder for $149 and is slated to ship in late 2013.

Leap Motion and MYO are part of the next wave of “human/machine interface.” MYO is Leap Motion’s first real competitor, however, Lake said that MYO’s unique muscular sensing technology makes it more accurate and easy-to-use than other versions that use cameras. That approach is less precise and can lead to “gorilla arm,” a phenomenon where the user must keep their arm elevated for the device to work. A few years ago, Microsoft was working on a prototype called MUCI that used medical electrodes, which require contact with the skin, to enable gesture control. But this was not feasible for mass marketing purposes.

Like Leap Motion, MYO’s device aims to be as discreet as possible so the person using it forgets she’s wearing it, and actually gets to feel like Jedi Knight. Thalmic is also working on an API for developers that want to experiment and build applications based on the technology. Lake said that the applications are endless, ranging from medical robotics to a DJ looking for new ways to make music.

Thalmic Labs is based in Kitchener, Ontario. The team was inspired to apply to Y Combinator after sharing workspace with Buffer Box, a class from Y Combinator Summer 2012 class that was acquired by Google in November. Since unveiling the product this morning, consumers have placed over 2,000 orders.