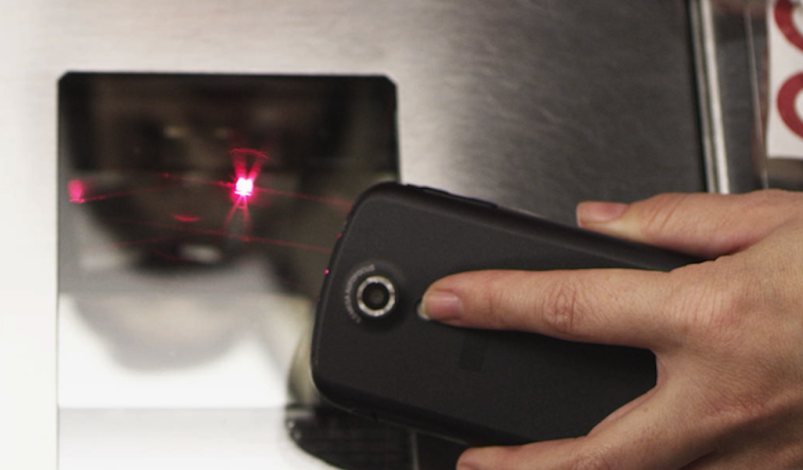 Our modern smartphone screens are great for many things — browsing the web, taking photos, etc. — but they’re useless when it comes to traditional barcode scanners.

So what are retailers to do? So far, those who could afford to upgrade have moved towards NFC and QR code readers to support smartphone transactions.

But Mobeam offers an alternative: Its technology can transmit 1D barcodes (like the kind on coupons and UPC labels) via patented light pulse technology. That means you can use it to redeem coupons, loyalty cards, or even prepaid payment cards at retailers who haven’t upgraded their scanners in the past decade.

The company announced last night that its technology is built into Samsung’s new Galaxy S IV smartphone. Aside from Apple, Mobeam couldn’t ask for a better partnership.

“The failure of barcodes on mobile devices historically has been pretty simple physics,” Mobeam chief executive Chris Sellers told me earlier this week. “Laser scanners can’t “see” a barcode on the screen — for one, because glass is reflective, and two, the screen is transmissive or backlit, so light overwhelms the sensor in the scanner.”

Mobeam’s technology could be an essential piece of the mobile payments puzzle. Digital wallets have been hyped up beyond belief, but they’ve failed to take off because they’re either relying on obscure technology like NFC, or they simply don’t have retailers signed up. With Mobeam’s technology in your phone, you could have a digital wallet that’s accepted everywhere with a standard barcode scanner.

Sellers notes that there are 165 million traditional laser scanners globally, which creates a huge market for Mobeam’s tech. The company has 13 patents issued around light-based communication. Mobeam’s technology is built into proximity sensor chips, so it’s not backwards-compatible with existing smartphones.

According to Sellers, the company’s tech is 99.7 percent effective in first-time use. Retailers don’t have to train their employees any differently — customers simply need to hold up their phones to the barcode scanner. Since the light pulses are incredibly short, Sellers notes that it has zero impact on battery life.

There’s certainly some outreach necessary so that retailers are familiar with the tech, but Mobeam is leaving that up to its partners, which includes P&G and three of the world’s largest coupon providers.

San Francisco-based Mobeam just recently raised $2.2 million in funding of an intended $3 million round, bringing its total funding to around $8.6 million.