If you’re a 3D printing pioneer with a focus on innovation, patents are probably the last thing on your mind. And that could be your undoing.

While lots of experts have argued that our current patent system is almost irrevocably broken across all industries, it poses a particular problem for young ones like 3D printing. Why? Because 3D printing folk are so busy innovating that they’re not paying enough attention to how existing patents factor into their work.

It’s a big problem, but fortunately organizations like the Electronic Frontier Foundation (EFF) are paying attention to it.”We don’t want the 3D printing industry to become a minefield of patent holders going after tinkerers. That’s a dangerous spot to be in,” EFF attorney Julie Samuels told me.

While overly broad patents aren’t too much of an issue for 3D printing now, it won’t be long until the industry grows to the point where it makes financial sense for patent holders to start suing growing 3D printing companies. (Just consider what’s already happening with the podcasting industry, for example.)

To avoid this fate, the EFF asked a bold, albeit slightly tough question: How do we figure out which patents are the most overreaching and could pose the most trouble down the line?

Answering the question has proved difficult for two reasons: One, the process of going through the patent archives is as slow as it is onerous (just look at the patent office’s website!), and, two, it’s often tough to figure out which patents are worth going after. 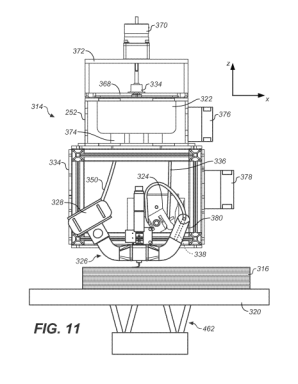 Above: This has something to do with chocolate … I think.

To help figure this out, the EFF recently teamed up with AskPatents, a Stack Exchange site for patent applications where lawyers, experts, and enthusiasts can submit evidence against broad patent claims.

Core to this effort is the fairly new “preissuance submissions” process, which allows anyone to refute a patent’s legitimacy by submitting evidence (i.e, “prior art“) proving that the patented idea already exists. So when the EFF submits a questionable patent (as it’s done here and here), it also asks users to do some detective work. How legit are these claims?

“We really wanted to take advantage of the tight relationships and institutional knowledge of the 3D printing community,” Samuels said.

While all of this sounds promising, lots of concerns remain. For one, because the procedure is so new, Samuels says she’s not entirely sure how things are going to work out. In theory, once the EFF submits a valid claim, the patent examiner will then send the patent back to its applicant and ask them to narrow their patent’s focus.

But some of the patents in question are so broad that making them any narrower would render them completely unrecognizable. Consider “Additive Manufacturing System and Method for Printing Customized Chocolate Confections” a patent filed by 3D printer maker Stratasys that describes a system for — you guessed it — printing with chocolate.

As commenters in the AskPatents thread point out, that’s a pretty broad, obvious claim, and there’s tons of prior art that predates (and possibly invalidates) Stratasys’s application.

The other thing to hammer home here is that broad patents are a problem with all industries — not just 3D printing. Samuels and the EFF know this, which is why they intend to use their current project as an example for efforts in other industries.

“We need to raise awareness about the larger problem of improperly-granted patents. People in all industries have to pay attention now,” Samuels said.