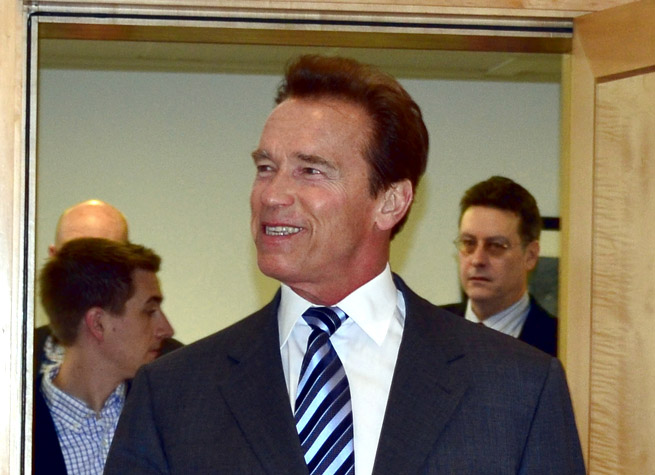 Fitness app Fitocracy has reached 1 million registered users, and to celebrate, it has signed a partnership with movie star/politician/robot/fitness guru Arnold Schwarzenegger to give users a new workout routine to try.

Fitocracy was founded two-and-a-half years ago and launched as a video-game like fitness app. Users earn digital points on the iPhone, Android, and web apps and “level up” as they do exercises. That’s still part of the service, but over time it has evolved from being an “RPG for fitness” to a network of people supporting each other on their fitness goals.

“People are using Fitocracy as a social network like they would Facebook,” Fitocracy co-founder Brian Wang told VentureBeat. “It’s taken on a life of its own.”

The social network aspect lets you post about your routine and compete with your friends for badges. Fitocracy’s network has expanded into the real world with meetups in New York, Toronto, Houston, Washington D.C., Philadelphia, and Indianapolis. Wang also said he’s heard stories of people meeting through Fitocracy and eventually getting married.

Along with its growing network of users, Fitocracy wants to give you routines from fitness experts that include advice about workouts and ways to keep hitting your goals. Fitocracy calls these “Spark Challenges,” and they are each 15 minutes long. The routines will start running in April.

“Very few people have someone to tell you what to do, and personal trainers are prohibitively expensive,” Wang said. “We want to provide users with fitness routines and goals they can actually accomplish.”

Schwarzenegger has offered up his own 15-minute “Spark Challenge.” Before he was known for movies and politics, Schwarzenegger was a prominent bodybuilder and fitness expert, winning the Mr. Universe title at age 20. So bringing his celebrity power to Fitocracy makes sense as a way to interest new people in the service.

“From my first day of training, I’ve known the importance of counting reps to constantly improve,” Schwarzenegger said in a statement. “Then, my only technology was chalk and a chalkboard, but innovation has opened up endless possibilities to track health and fitness. That’s why I’m excited to launch this challenge with Fitocracy, so that we can inspire others to find the joy in doing one more rep today than they did yesterday.”

New York-based Fitocracy has eight employees and has raised “between $1 and $2 million” in funding to date from 500 Startups and several angel investors. The company makes money by offering premium accounts with more features for $5 a month. Wang would not reveal the company’s number of paid users or monthly active users.

Check out the app being reviewed on The Dr. Oz Show a few months ago below.