Smart phones, tablets, and smart TVs will soon be powered by the same technology stack — ARM processors running iOS or Android along with their respective app stores. That means the key differentiating feature between these devices will be staring you right in the face — screen size.

Screen size matters more than content creators think. For starters, look at this research from Google that shows engagement increases with screen size. 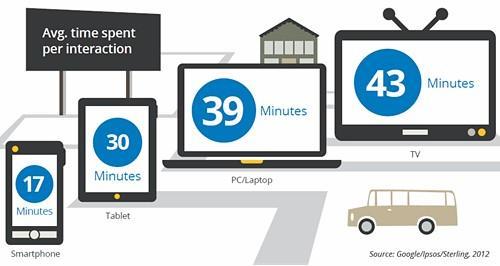 This makes sense, as people consume content differently on different screen sizes. 4-5” phones are great for checking emails, tweets, social networks (especially uploading photos you took on your phone), listening to music, and playing casual games like Angry Birds. Consumers surveys show that email is the #1 activity on smart phones.

7-10” tablets are great for reading books and magazines, surfing the web, watching videos, and playing casual to mid-core game, like Plants vs Zombies or Infinity Blade. Consumer surveys show that gaming is the #1 activity on tablets.

30-50” TVs are great for long session movies, TV shows, and video games. Big screen TVs are usually hooked up to the best speakers in the house, so it’s great for rich audio and video experiences. Perhaps most important, the 30-50” screen is for content you want to share with family and friends. Increasingly, the user experience in front of the TV now includes a 2nd screen in the form of a tablet/phone. This dual screen experience is common enough that the Wii U built an entire controller to facilitate this.

App Annie recently started to track Kindle app performance and their data backs up my thesis on screen size. According to App Annie’s data, all of the current top 10 paid apps on the Kindle store are games. 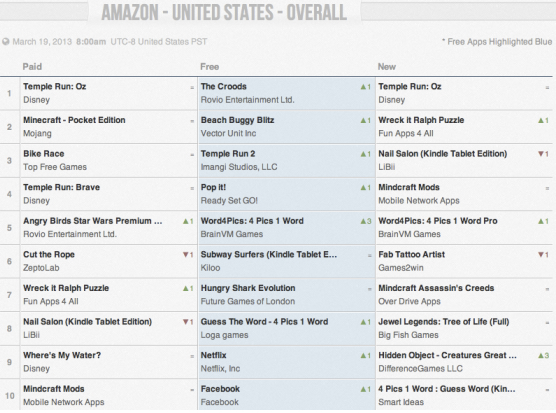 Meanwhile, on Google Play, seven out of the top 10 paid apps are utility apps. This makes sense as Play enabled devices are predominantly phones, while Kindle is a tablet. This juxtaposition shows that screen size matters for apps when it comes to phones vs tablets.

So what does this mean for developers? Sophisticated iOS and Android game devs need to build games with target screen sizes in mind to deliver an optimal user experience. Better UX is needed to improve monetization. In my field of video games, I’ve always believed that World of Warcraft doesn’t work on mobile and Angry Birds doesn’t work on TVs. It’s also worth pointing out that Guitar Hero (my game) never sold well on PC.

So why did we at Green Throttle Games target Android-based TV games? Because data shows that bigger screen sizes lead to longer engagement sessions. Our thesis is that longer engagement sessions will lead to higher monetization. This is true for video (think YouTube snippets vs. TV shows vs. movies). And of course, this is true for games (think phone vs. tablet vs. PC vs. console).