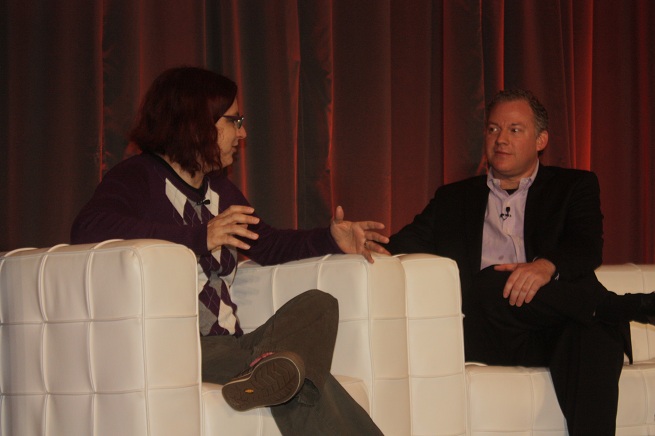 The growth of ESPN Mobile shows how fast the mobile landscape is gathering momentum. The sports broadcast network has more than 45 million monthly unique users, and 14.5 million of those use mobile content exclusively.

Michael Bayle, senior vice president and general manager of ESPN Mobile, spoke in an on-stage interview with AllThingsD’s Ina Fried at VentureBeat’s Mobile Summit in Sausalito, Calif. today. Bayle said that mobile usage is growing rapidly as mobile devices take over our lives. He said that 8 million people filled out their March Madness brackets, compared to 6 million last year. This year, 30 percent of those people used mobile to fill out the bracket, compared to 10 percent last year.

Mobile is a separate product that people can download as an app, but it can also be bundled into ESPN’s various subscription packages.

People are viewing millions of minutes of live sports video these days, and the Watch ESPN app has been downloaded 20 million times. But mobile comes with its own challenges. Much of the experience of sports is watching something live. Live mobile programming is growing, but the company doesn’t insert preroll ads into that experience, because it interrupts the viewing experience.

Bayle said about 50 percent of users are on iOS, 45 percent are on Android, and the last 5 percent are split across Windows Phone and BlackBerry. The latter two are growing and are particularly relevant in international markets.

“You can never count out the innovation that comes from Microsoft, and we are there on BlackBerry 10 on HTML5,” he said.

But Bayle said native apps are still likely to win out over slower HTML5 apps.

He said the average person uses 11 mobile apps, and sports account for 1.5 of those. Once someone starts using a sports app, their engagement with that app skyrockets.

As far as headaches go, Bayle said he would appreciate more transparency from Apple on the success or failure of mobile marketing campaigns. Google Play, by contrast, is more transparent, he said.