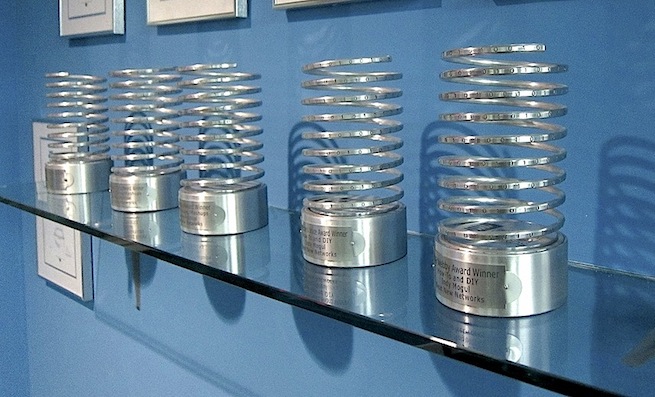 Awards-season junkies, your wait for The Webby Awards nominations is over – I know, you can barely contain your excitement. Tuesday, the International Academy of Digital Arts and Sciences announced the nominees for its 17th Annual 2013 Webby Awards, which highlights the most interesting stuff found on the Internet in the last year.

For the last 16 years, the Webby Awards have honored the best of the web, including most-loved websites, viral YouTube videos, useful mobile apps, and inspired displays of advertising. Last year’s winners include Instagram for Breakout of the Year, Louis C.K. as Person of the Year, and Nyan Cat for Meme of the Year.

In each category, members of the IADAS choose their winner and the general public votes for a winner of the People’s Choice award. Anyone can cast their vote for this year’s nominees starting Tuesday on the Webby’s website.

Without future ado, here are a few of the nominees:

Lena Dunham also snagged a nomination for her HBO show “Girls” and Felix Baumgartner is up for a Webby in the Online Film & Video: Branded Entertainment category for his 128,100-foot free fall from space. Other notable nominations include Pinterest, the Nike+ FuelBand, and Google’s Maps app for iOS, which followed Apple’s disastrous foray into making it’s own map app in iOS 5. For the full list of more than 850 contenders and vote for your favorites, head over to the Webby Awards site.

The Webbys have faced a great deal of controversy over the years, most of it because would-be nominees must pay to throw their name in to the hat to be considered for an award, and pay again to attend the award if they get nominated. Critics of the Webbys have called the award a joke, saying it has no real value and is just an excuse for tech types to emulate the glamour of the Oscars.

Despite that criticism, the Webbys still attract the attention of the general tech-loving public, who cast 1.5 million votes last year for the 2012 awards. The IADAS expects that number to grow this year.

Looking back on past winners, it’s clear that the awards continue to have a finger on the pulse of the most popular Internet trends each year. So if you’ve been living under a rock and want to know what’s been happening online, or perhaps just want to find the most-liked news sites and Internet companies of the last year, the Webbys are still worth checking out.

Winners will be announced on April 30 at the Webby Awards in New York.