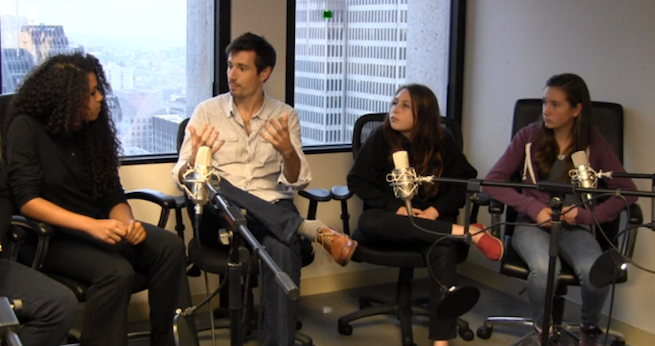 Could you explain your enterprise technology company to a 13-year-old?

We’re all a bit sick of the “big data” trend, and founders making abstract claims about “answering unknown knowns.” And don’t even get me started on “SaaS,” “Dbass,” and “PaaS” (frankly, they are all a pain in the ass).

So VentureBeat has hatched a crazy plan to banish buzzwords and marketing speak, at least for an afternoon.

At our San Francisco office, VentureBeat invited four CEO’s from various cloud and “big data” companies to talk tech in an on-camera interview.

The catch? The execs would face a grilling from … a group of kids flown in from around the country. We didn’t just want Bay Area natives on the panel, as many of them grew up surrounded by tech. So we contacted an ed-tech startup called Rocket21, which helps young students explore their interests and passions, and they assembled a group.

The kids proved to be straight-talkin’ interview machines (I’d better watch my back; I could be out of a job one of these days) with a keen understanding of consumer technology and mobile apps.

We were gobsmacked when Ella Gillmor, 13, asked Huddle founder Andy McLoughlin about his data center (pictured above, center, with Gillmor and Alexa Stephenson) and if the cloud collaboration tool was “similar to Apple iCloud.” Her dad, Steve Gillmor, works in a senior role at Salesforce.com, so she’s clearly versed in tech. Likewise, 13-year-old Tommy Whiteley asked some tough questions about the Software-as-a-Service business model (“Do you make money by selling to people or companies?”)

It became apparent during the interviews that these tech natives had little patience for jargon. Gillmor prompted Chris Saad, the cofounder of Echo, to explain the meaning of a widget (which Saad aptly described as a “piece of a website that gets put into other websites”).

Alexa Stephenson, a high schooler from Tennessee, asked the founders whether big data is like the movie Fight Club because no one could give her a straight answer, which prompted nervous giggles from the room.

It’s not easy to explain business intelligence and analytics in such simple terms. Here were some of our founders and CEO’s explanations:

For further jargon-free (we promise!) discussion, register for DataBeat 2013, the conference about putting data to work.

Kids from VentureBeat on Vimeo.