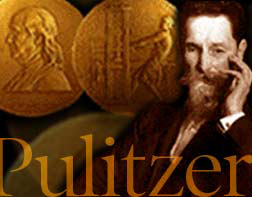 A small energy news site has a huge reason to crow today: InsideClimate News won a Pulitzer Prize for national reporting, for its coverage of the obscure “Dilbit disaster” in which a million gallons of Canadian tar sands oil spilled from a pipeline into the Kalamazoo River.

It’s quite a coup. The Pulitzer is American journalism’s top honor, and InsideClimate News is a tiny nonprofit. The authors are a trio of talented journalists, two of whom are currently freelancers and one of whom was a freelancer until 2011, when she joined the staff of the InsideClimate News. One, David Hasemayr, worked for the San Diego Union Tribune, but none of the three seem to have spent time punching the clock at any of the the traditional stables of prize-winning journalism such as the Washington Post, Miami Herald, or the New York Times.

“It’s a watershed moment for our nonprofit news organization, a good day for environmental journalism, and a hopeful signal for the future of our profession,” InsideClimate News founder and publisher David Sassoon said in the site’s story about its award.

It’s only been five years since the committee that awards Pulitzer Prizes first opened contention to online-only news sites. In that time, Pulitzers have gone to just a handful of online news outlets, starting with Pro Publica in 2010, which won a prize for investigative reporting. Cartoonist Mark Fiore won a Pulitzer for cartoons published on SFGate.com (the partner site of the San Francisco Chronicle), also in 2010, and Pro Publica snagged another investigative prize in 2011. Last year, 2012, websites Huffington Post and Politico both snagged Pulitzers for their reporting. Both of these are huge, well-funded operations, however.

By contrast, InsideClimate News has just seven full-time staffers and an array of freelance contributors. Its funding comes from grants and charitable donations. The Pulitzer is the site’s first major award.