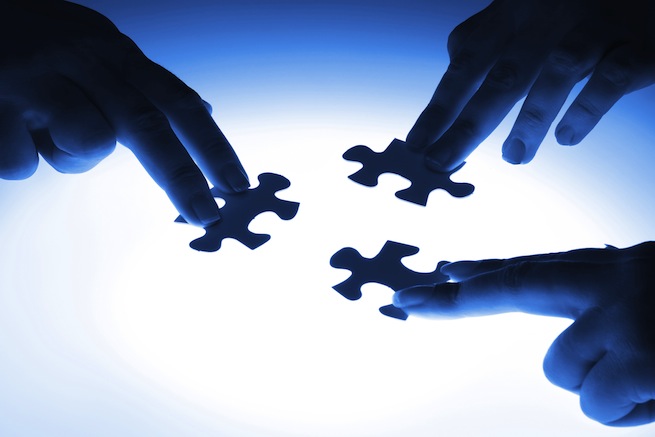 This post is written by VentureBeat contributor Jon Soberg.

Payment-processing startup Paymill recently raised 10 million euros to drive expansion throughout Europe. As the lead investor from Blumberg Capital, I am positively biased about the opportunity, but the story is bigger than Paymill, Stripe, Braintree, or any of the new generation of payment processing companies.

So before giving in to the hype around financial technology startups, it’s worth examining the huge opportunities that lie in fixing broken processes.

How can we improve painful processes?

Every entrepreneur who has had to go through the process of setting up their payment gateway and/or merchant account knows that it isn’t always simple. When I set mine up, BrainTree, Stripe, and Paymill weren’t around. I was given a chisel and stone tablet and asked to deliver all my information in triplicate.

Intermediaries, paperwork, antiquated systems, processes, and regulations still play a prominent role in today’s ecosystem. Companies like Stripe have made things much simpler on the front end, especially for developers, eCommerce, and SaaS businesses.  But, much of the world hasn’t moved yet, and behind the scenes, there are typically multiple institutions involved just to accept a credit card transaction.

Take the story of Jamie, an entrepreneur whose company charges for digital goods. When he was setting up his site to accept payments, he signed up with a payment gateway (before Stripe or Braintree were around). He filled out all the paperwork. Two weeks later he was rejected because the form was not completed correctly. He redid it. Ten days later he got accepted, but only for the gateway; he still needed the merchant account.

He went to his bank where they were happy to help. They gave him a large stack of paperwork to fill out, which he did. A couple of weeks later he got a call to ask a few clarifying questions.  Did he have any transactional history? No. Could he explain exactly what he was selling? Sure, but they didn’t seem to get it. What about refunds? He didn’t know because he didn’t have history. They had to make conservative assumptions. Nine days later he got the good news. He had been given a merchant account as a high risk merchant, and his transaction fees would only be 2.5 times the norm, and he would have the opportunity to reduce his rolling reserve over time as he built up positive transaction history. I recall his response to the news vividly, but can’t really repeat it here.

And all of that was before he started any technical integration, or trying to get all of this live in a production environment.

Thank goodness for BrainTree, Paymill, Square, and others that are tackling this problem. 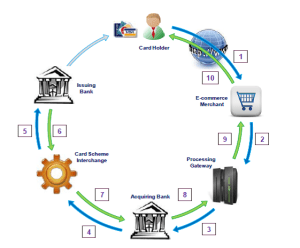 But don’t kid yourself. We still have a lot of work to do. Just take a look at all of the steps and players involved in a “simple” credit card transaction (pictured left):

2.  Merchant sends credit card information to payment gateway (could be handled by third party through an API)

4.  The acquiring bank sends the transaction to the credit card exchange, which acts as an arbiter and clearing house in the final transaction.

5.  The transaction goes to the issuing bank for approval (after fraud analysis is completed), and if it is approved, the approval code is sent back through each group to the customer (steps 6-10).

In all, 5-6 players generally touch each transaction, and the round trip is completed in seconds or less to get approval when you swipe your card or enter it online.  Companies such as Paymill and Stripe wrap the functions of the payment gateway, fraud analysis and acquiring into one service, but they work with partners to make that happen.  In Europe, Credorax has built a single technology platform that integrates the acquiring bank, fraud analysis and gateway, which is simplifying part of the chain.  All of these companies are doing great work to simplify payments, but they really represent the visible part of the iceberg. (This is not including companies like Dwolla who are building their own network outside of the traditional rails).

The huge opportunities for this new generation come when today’s technology, data analytics, and design are applied to legacy problems in big markets (credit card processing globally is about $5 trillion). It isn’t an easy path, and although some new companies have skyrocketing growth, their huge opportunities come when they expand beyond just the “face” of payments and get further into the guts.