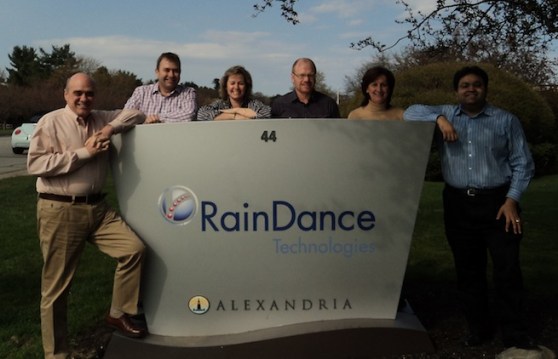 Raindance Technologies has closed a $20 million fifth round of funding with strategic investment from Myriad Genetics, the biotech company at the center of this month’s debate about we should be able to patent human genes.

Myriad’s involvement in the landmark federal case has not put a road block in its expansion plans. The company has signed a multiyear commercial agreement with Lexington, Mass.-based Raindance. The terms of the investment dictate that Raindance will provide technology to improve Myriad’s hereditary cancer test and speed up its process for large-volume genetic testing.

In recent years, the cost of sequencing the human genome has fallen, reaching a low of $1,000 in 2012 due to a microchip and machines designed by genomics company Life Technologies Corp. Raindance is one of the companies that seeks to capitalize on these developments, and it’s providing research tools for the growing crop of genetics labs.

“Imagine all diagnostics some day being reduced to a simple blood test,” said CEO Roopam Banerjee, who believes Raindance products are a “step in that direction.” The company’s overarching mission is to develop more reliable methods for researchers and physicians to detect disease and predisposition risk.

In a phone interview, Banerjee said he took on additional funding as the company is at an “inflection point.” He explained, “We — along with our customers — have generated some compelling data to track complex human disease noninvasively.”

Raindance claims its customers will process 50,000 samples in 2013 and 100,000 samples in 2014 alone. According to Banerjee, the company doubled its sales in the previous year and anticipates explosive growth in the wake of the funding.