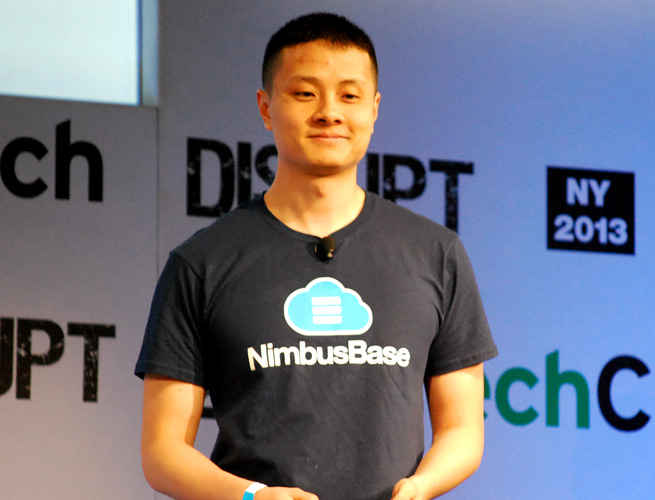 All the developers and consumers out there who hate Apple’s iCloud might have a new favorite service with NimbusBase, a a startup that helps sync user data across app platforms.

NimbusBase debuted its cloud service today at TechCrunch Disrupt NY during the Startup Battlefield competition. Essentially, it provides a middle man service that stores your data in already existing Dropbox and Google Drive accounts. Then, when you log in to those accounts from an app, your user app data syncs no matter where you go.

NimbusBase cofounder and CTO Ray Wang [above] said it provides a lot of benefits to both developers and consumers. For developers, it claims to save them weeks or months of backend building time and potentially could save them “thousands of dollars” in data storage cost savings. For consumers, your user data goes with you no matter where you access an app.

Here’s an easy-to-understand example of what NimbusBase could do: In Angry Birds, you could beat a level on the iPhone, but when you play the iPad version, you still have to clear that level. NimbusBase can sync that data so you are always in the same place in the game regardless of which platform you want play it on.

Now you extrapolate that to all kinds of other apps — health, social, business, and so on. Theoretically, there should be a ton of developers out there who want user data seamlessly following users no matter what platform they use.

NimbusBase only works on web apps for now, but it intends to launch Android and iOS versions of its software “soon.”

Currently, it charges developers $500 a year for the service and it only requires adding a few lines of code to install it. Next up, NimbusBase said it plans to add support for Microsoft SkyDrive and other personal services in the near future.

The New York-based company was founded in August and has raised $30,000 in seed funding to date.