The rise of cooking shows made the guidance of professional chefs widely available, turning ordinary at-home cooks into culinary masters. Panna has raised $1.35 million to make the connection between chefs and home cooks even stronger.

Panna is a digital cooking magazine for iPhone and iPad that features high-definition video lessons led by highly acclaimed chefs like Rick Bayless, Jonathan Waxman, and Anita Lo. An issue is released every months and contains 13 seasonal video recipes from the participating chefs. The emphasis is on home-cooking, so each chef guides the user step-by-step through their favorite recipes in a home kitchen environment.

“It’s inspiring to help anyone create amazing food for someone they care about, and that matters,” said founder David Ellner in an email. “People are always looking for inspiration around recipes to find new ways to impress the people they’re cooking for. Panna uses the best chefs to provide this inspiration. I’m trying to transform the way people follow recipes and give people recipes that are guaranteed to be delicious. I want people to cook more and build their confidence around cooking.” 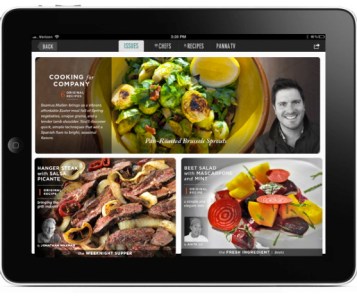 The app includes highly visual, drool-worthy photography of lacquered chicken, lasagna, and caramelized cauliflower, to name a few. The content is highly curated, and the chefs not only provide basic instructions, but also little tips and tricks and suggestions, like how to cook for company or making the perfect biscuit, and shopping lists. Ellner said that Panna bridges the gap between traditional cookbooks and sites like YouTube which are not curated and often have lower production quality. It was named one of the best apps of 2012 by Apple and chosen as an Editor’s Choice in the app store.

The popularity of shows like Top Chef and the expansion of the foodie movement has led to increased interest in cooking tasty, high-quality food at home. Whether it is for a dinner party or a casual Sunday supper, people are excited about whipping up restaurant-quality food in their own kitchens. Panna caters to this crowd and provides chefs wider opportunities to engage with an audience. The first download is free and after that, individual issues are $4.99 with a year’s subscription for $14.99. Content never expires and each issue also contains one free recipe. 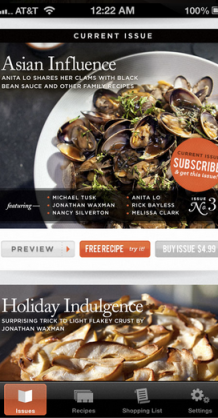 Ellner said that his biggest challenge with Panna is getting people to pay for content in an area where so much content is free. However, since the target audience is people who are passionate about food and the product is “worth it,” this should not be an obstacle to continued growth. Before founding Panna, Ellner spent 25 years as an executive in the media industry and brought his experience with video content and digital technology to make Panna as beautiful and seamless as possible.

This round will be used to expand the team, produce new content, and accelerate marketing and sales efforts. Panna is currently expanding to Android, and the June issue will feature live fire Mexican grilling recipes.

Check out this video from Jonathan Waxman (pictured above) about how to make a perfect apple tart.