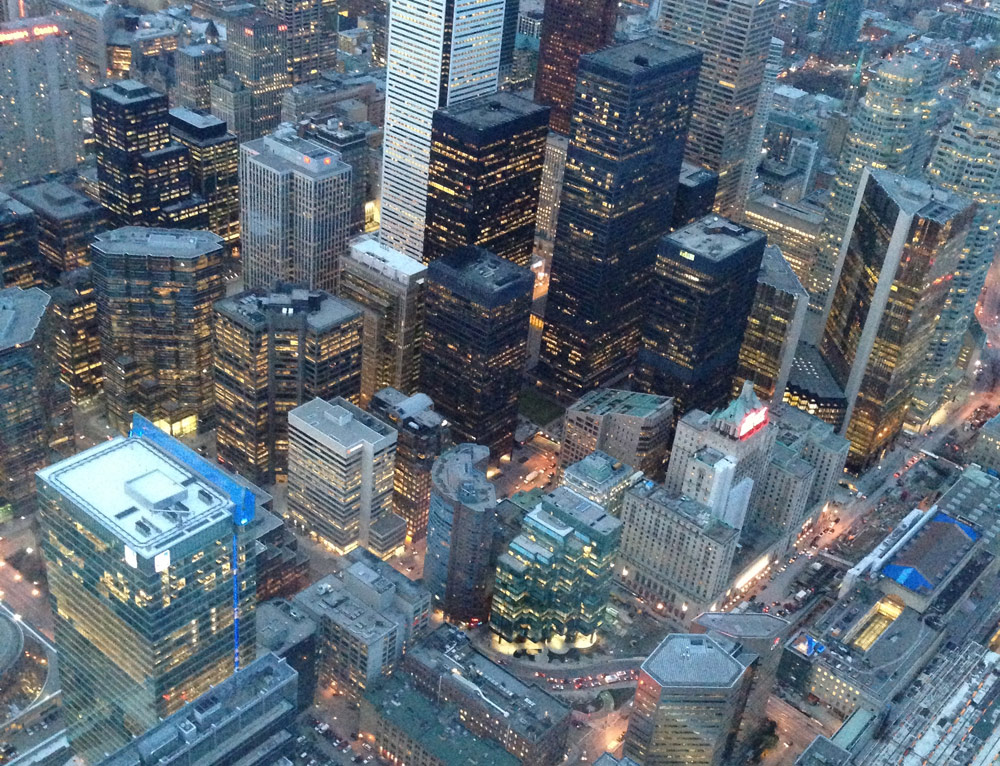 Canadians: humble, mild, polite, with a global reputation for being non-aggressive.

Except, of course, at a hockey game. And, increasingly, in Ontario, where startups, government, industry, universities, angels, and venture capitalists are working aggressively to try to create the world’s leading technology hub. 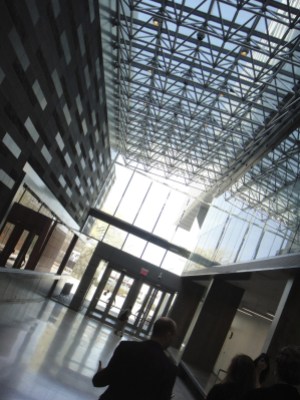 Above: Inside Waterloo, Ontario’s new $160M center for quantum computing.

“We want the world’s next biggest tech company to be built in Ontario,” the most populous Canadian province’s minister of research and innovation, Reza Moridi, told a small group of journalists recently in Toronto.

That’s aggression — even if spoken in a kinder, gentler way by an urbane, mild-mannered politician.

It also might strike some as hubris, given that Ontario’s biggest technology story to date is that of a dying smartphone manufacturer, BlackBerry (formerly known as Research In Motion).

Ontario is home to about 40 percent of Canada’s population and accounts for 48 percent of Canada’s gross domestic product. It’s the fourth-largest population center in North America, after Mexico City, New York, and Los Angeles, and it produces more cars than any other region in North America, including Michigan. Ontario also has the Americas’ second-biggest financial services sector, after New York.

More to the point, it’s North America’s second-leading cluster for technology companies, after California, and has the third-largest concentration of life sciences companies on the continent. 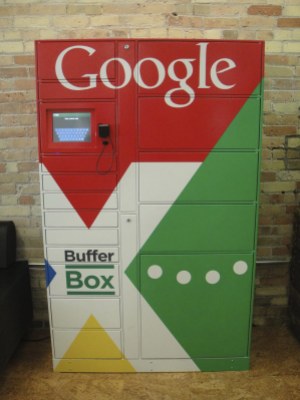 The government has invested $3.6 billion in those sectors, primarily, over the last decade, with two-thirds going to research and development, and one-third focused on building the entrepreneurship ecosystem.

That money has had an impact.

For years, countries like Canada and the U.K. have complained about a brain drain, with the best talent heading stateside for more options and better pay. Not anymore. In fact, quite the reverse.

She’s starting her company at Communitech, a thriving, almost frenetic community of startups, accelerators, massive technology companies, students, and coworkers in Waterloo, Ontario. An hour’s drive up the 401 from Toronto, Waterloo is a city of 98,000 that saw more than 500 startups take root in 2012. And the massive burst of innovation has not gone unnoticed.

“Something very interesting is happening here,” Google’s top Canadian employee, Steve Woods, told me. “This area has a very high proportion of startups to population. Google loves startups … and we love to hire entrepreneurial people.”

Woods himself is a Silicon Valley refugee, returning home to Canada after building several companies in the Valley. Google recruited him over the course of several years to lead its Canadian operations.

He points directly to U.S. immigration policies that pose a critical problem for both startups and large, wealthy corporations such as Google. Getting into the U.S. to build a company or join a startup is notoriously difficult and expensive.

Meanwhile, Canada has just recently taken even more steps — such as the Startup Visa — to make it simpler, quicker, and cheaper to come to Canada.

“Because of visa situations, Canada has received a disproportionate amount of the talent that is coming into North America,” Woods said.

All of that translates into a significant competitive advantage for Canadian startups and tech companies.

Another competitive advantage, particularly in the Waterloo region, is the constant stream of high-quality students coming out of engineering, math, and computer science schools. I heard this ad nauseam from government representatives I met with, and credible sources in the industry confirmed it. 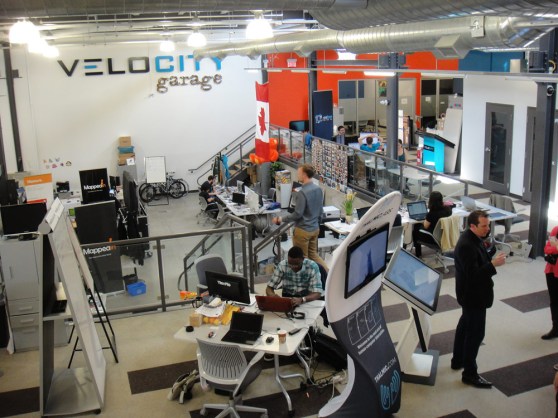 “Waterloo University produces an amazing kind of talent,” Woods told me. “It gives students a great grounding in computer science, but also by the time they graduate they’ve passed through four summers of co-op programs, so they’ve worked at Facebook, at Google, Microsoft, BlackBerry, or other companies.”

Ontario’s 44 universities produce about 30,000 computer science and engineering graduates each year, a steady flow of new talent for the province’s startups as well as established IT, life sciences, and aerospace companies.

By contrast, California — a state with about three times the population of Ontario — produces only 21,000 STEM graduates per year. The results are clear, at least for Woods.

“People that come into Google from the University of Waterloo do disproportionately well,” Woods says. 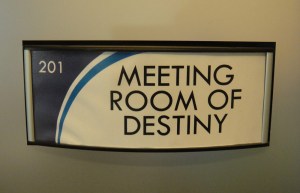 Above: One of the meeting rooms at Communitech, a startup mecca in Waterloo, Ontario. Google also has an office here.

Rob Crowe, executive-in-residence for Waterloo-based Institute for Quantum Computing, the second-largest quantum computing research center in the world, agrees.  And he points out another advantage that translates to more startups coming out of key Canadian universities.

According to Crowe, a key difference between the U.S. and Canada is that many Canadian universities have followed the European model of education-funded research and development. Essentially, professors and researchers at the University of Waterloo own any intellectual property they develop, not the institution they work and teach for. That’s an incentive for academics to put their best foot forward while on faculty, and to kickstart companies when their ideas result in a viable product or company.

“This is the university that throws off more startups than any other university in the country,” Crowe told me.

All of the above regional traits are excellent for students, researchers, and startups, but there’s also good news for investors. Moridi’s ministry of research and innovation has helped reduce corporate tax, while also providing significant tax credits for companies doing innovative work.

“Ontario has one of the lowest corporate tax rates in North America, at 22 percent,” says John Marshall, president and CEO of the Ontario Capital Growth Corp., Ontario’s voice in two venture funds totaling about $500 million. The funds were raised partially by government, which recently announced intentions to pump in another $50 million, but mostly by venture capitalists and institutional investors.

Above: Google has invested significantly in Waterloo, Ontario, hiring 200 engineers for its Canadian engineering headquarters.

The goal is simple: Invest in potential high-growth venture-stage startups in Ontario via a fund-of-funds approach that ensures industry participation and leadership in every specific investment. In other words, Marshall puts money into funds assembled by local VCs such as Omers, Northleaf Capital Partners, and Rho Canada. Those VCs in turn drive the actual investments into companies like Shopify, Desire2Learn (which recently closed an $80 million round), Polar Mobile, and BlueCat Networks.

“Our overall aim is to build the ecosystem for innovation,” Marshall says. “That includes the demand side, with accelerators and startups, and the supply side: seed funding, angel investors, and venture capitalists.”

The fund-of-funds strategy appears to be working. Two years ago the average fund size in Canada was $60 million, compared to $180 million in the U.S., but now the average Canadian VC fund is $90 million. Other venture entities, such as Intel Capital and Samsung Venture Investment, are following the money and making their own investments.

When that money gets into the hands of actual startups, it goes further, according to the companies I talked to. The reason is Canada’s federal and provincial research and development credits, which the Ontario government says are “among the most generous of the OECD countries.” 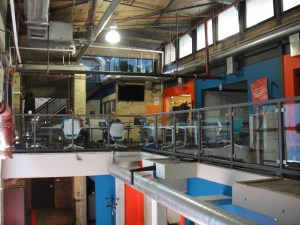 Taken as a whole, those credits can reduce the after-tax cost of $100 worth of R&D to just $57 for corporations and just $39 for startups.

Fixmo CEO Rick Segal, an ex-patriate American, says those tax credits are one of the key reasons he chose Toronto as the location for his latest mobile security startup. The CEO of online advertising startup Chango, Chris Sukornyk, told me the same thing.

Marshall says that the credits simply add on to a startup environment that has long stretched every single dollar as far as it can go.

That capital is starting to flow more freely lately, with VC investment up in Ontario in the past few years. But startups, who benefit most from the R&D tax credits, also have additional benefits. Almost every startup that graduates from a major Canadian accelerator such as Hyperdrive and Extreme Startups in Ontario, FounderFuel in Montréal, and GrowLabs in Vancouver, gets offered a $500,000 convertible note by the Business Development Bank of Canada.

That’s cheap and none-dilutive money, and provides more runway for startups. Most of which, realistically, need more than a three-month stint in an accelerator program to become real companies.

There’s no doubt that Ontario is taking smart steps with the ultimate goal of dominating the business of technology. But can it really out-innovate the innovation capital of the world, Silicon Valley? 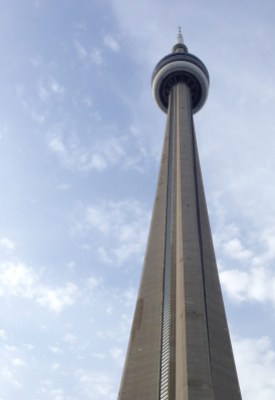 In addition, Ontario officials quietly let me know that they believe Ottawa would have won a spot in the top 20 as well, if Startup Genome had analyzed the data just a bit differently. That would, of course, have given Ontario three cities in the global top 20.

But even considering the province’s leading contender, there’s still a long way between eighth and first. And every country in the world, seemingly, wants to follow the Silicon Valley model to the yellow brick road of employment and riches.

VC investment in Canada overall is still just a fraction of that in the U.S., with about $1.5 billion invested in the entire country over all sectors in 2012, compared to $8.3 billion invested in the U.S.  in software alone, and another $6.7 billion just in web-based startups. In Ontario specifically, VC investment was just $603 million, compared to California’s U.S.-leading $14.1 billion.

Turning to BlackBerry for inspiration

Despite the small numbers, startups are increasingly choosing Ontario as home. Taxation and immigration policies as well as investments from blue-chip funds like Union Square and Kleiner Perkins are having a massive cumulative effect.

Even BlackBerry is feeding the culture of innovation in Ontario, despite being in what are perhaps its death throes.

Fixmo CEO Segal says BlackBerry has been an amazing influence in Ontario, and continues to be influential. “There are lots of alumni from RIM, both voluntary and involuntary,” he says with a wry grin.

Marshall says the growth of BlackBerry from nothing to its heights as the first key innovator of the smartphone revolution has had its own impact, regardless of the company’s current situation.

“Now you’ve got kids coming up who saw their parents do it,” he says. “So they believe they can do it too.”

In the against-all-odds world of the startup, belief is the key ingredient of success.

Disclosure: Ontario’s ministry of economic development invited VentureBeat to visit the province, and paid my expenses. My reporting, however, remains my own.