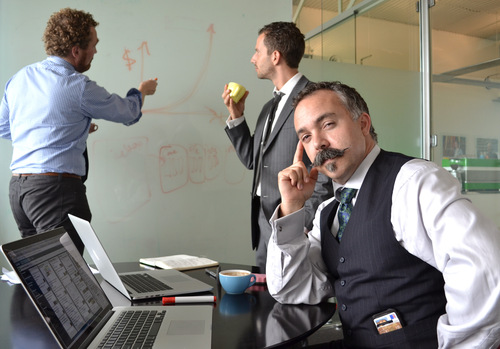 Dongles may be leading the point-of-sale revolution, but software plays a role as well. Vend, a company that makes point-of-sale software, has raised $6.5 million to expand operations and develop the product.

Vend’s technology integrates with existing systems like printers, cash drawers, and barcode scanners. It collects data and stores it in the cloud, and it’s accessible on Macs, PCs, and iPads. Business can manage their inventory, monitor and track sales, and look at real-time reporting.

Traditional POS systems are not connected to the Internet, difficult to manage, and expensive. A host of startups have cropped up over the past few years building on developments in mobile technology, cloud computing, and the growth of digital payments to give the POS industry an overhaul.

The most well-known of these startups is Square which pioneered a small piece of hardware known as a dongle that is plugged into an iPhone or iPad to accept credit cards payments. The dongle is accompanied by a suite of software called Square Register that includes checkout customization features, management tools, and data analytics. PayPal and a host of clones such as iZettle and Payleven have similar solutions.

Vend is like Square (or PayPal or iZettle or Payleven) without the dongle.

Vend’s funding news comes on the heels of announcements by Square and PayPal yesterday that could sound the death knell for cash registers. PayPal announced that it would offer free credit, debit, check, and PayPal processing to U.S. businesses that adopt its PayPal Here solution, and Square released a new piece of hardware called the Square Stand that provides a more “elegant” alternative to the cash register.

However, businesses that already have POS hardware may not want to throw them out and start fresh, which is why Vend’s solution is appealing. Vend launched in 2010 and now powers payments in 6,500 stores in 100 countries. Customers include businesses in fashion, sports, tourism, food and drink, and healthy and beauty who pay a monthly subscription fee for the software.

Vend is based in Auckland, New Zealand. Half of the funds came from new investors in New Zealand and Australia, including the Milford Active Growth Fund, and entrepreneurs Craig Winkler, Paul Bassett, and Matt Rockman. Existing Berlin-based investor Point Nine Capital also contributed. This brings Vend’s total capital raised to just under $10 million.