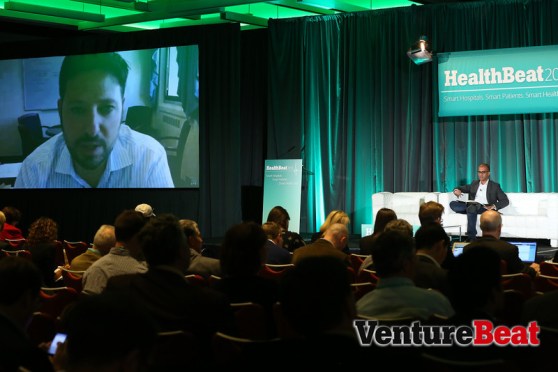 So says Bryan Sivak, the chief technical officer and entrepreneur-in-residence at the Department of Health and Human Services, the cabinet-level agency that regulates the $2.8 trillion U.S. health care market. Sivak joined VentureBeat’s HealthBeat conference today via a video conference (see photo above).

Just one of the areas that’s becoming fertile ground for entrepreneurial innovation: the health insurance exchanges mandated by the law.

These exchanges bring a level of transparency and openness to the insurance market that hasn’t been easy to find until now, Sivak said. The new exchanges will be large, consumer-facing marketplaces, and the insurance industry hasn’t been exactly nimble about embracing the latest consumer tech trends — so there will be lots of opportunities for startups to bridge the gap.

They’ll increase competition, because people will be able to see and compare insurance plans more easily. Now, any qualified, licensed insurer will have access to a market of potential customers via the exchanges.

Also, he said, the act will bring 30 million to 50 million more people into the ranks of the insured, creating a new pool of customers to market to. And there will be lots of data.

Apart from the ACA, Sivak also said government has an important role to play in facilitating health care innovation.

Government can help spur technology in three ways, he said:

“Just think about that: A small government intervention has caused EMR adoption to go from under 15 percent to over 70 percent,” Sivak said.

What’s more, government sits on top of a lot of data. Sivak estimates that HHS has about 1,000 data sets, 400 of which have been catalogued on the agency’s HealthData.gov website. Some of the datasets aren’t free, though HHS is working to bring the costs down. So there’s a long way to go still.

Sivak, a former entrepreneur who cut his teeth in San Francisco during the dot-com days, says his attitude toward government’s role is a new perspective for him.

“The only time I interacted with government was when I needed to file my incorporation paperwork with the State of California,” he said of his experience in the 1990s — not atypical of many tech entrepreneurs.

But if he’s right, techies — at least those who want to do business in the health care field — would do well to pay a lot more attention to what’s going on in government.