In two weeks, tens of thousands of people will fill the streets of Toronto for the seventh annual Luminato Festival to see beautiful works of art, hear great music, and enjoy the sights of a world-class city. They’ll also make history by participating in a first-of-its-kind augmented reality exhibition.

After downloading an app for the event, attendees can point their phones at different places around David Pecaut Square to see a “virtual gallery” not visible to the human eye.  Augmented reality works by displaying layers of computer-generated information on top of a view of the physical world. In this case, as they point their phones at different places around the square, they can see works of art on their screens that they can interact with, share, and discuss with others. As people explore the virtual art pieces, a heat-map will be created displaying where they are and what they are looking at. 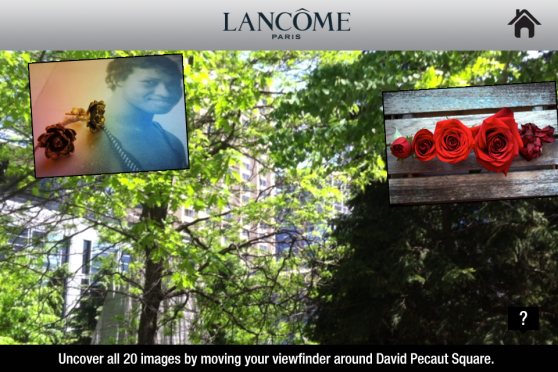 When the event is over and people are done using the app, what they will leave behind is an entirely new type of digital art: a giant, crowdsourced version of the iconic Lancôme rose spanning the length of an entire city square. It will be an enormous, virtual mural of sorts that each person has individually contributed to, just by participating.  And it will be the world’s first “human heat-map logo.”

Find out more about the future of mobile advertising in the “Mobile Advertising Armageddon or Heaven” track of VentureBeat’s HealthBeat 2013 conference, July 9-10.

This will all be made possible by the groundbreaking work of a San Francisco-based, three-year-old startup by the name of CrowdOptic.

Led by serial-entrepreneur Jon Fisher, the company has created a technology that is able to take the GPS, accelerometer, and compass data from multiple phones to see what people are focusing on. Instead of just recording a phone’s location, CrowdOptic is able to compare the information from different phones with one another. The company can tell where different people in a situation are pointing their devices and so measure what they are paying attention to.

One of the most unique things about CrowdOptic’s technology is that, unlike modelling software, it takes an analytics-based approach, so it can track an object as it moves. This allows things like being able to see the vital stats of an athlete mid-game when you point your phone at them — what Fisher calls a “personal jumbotron.” Another usage is seeing the social media hashtag and discussion of an event as it is occurring;  if this can really work the way it is intended, it will have huge ramifications for citizen journalists and emergency management.

The use of augmented reality in marketing and entertainment isn’t itself a new development. Many companies have created apps around product-themed outings, like Stella Artois’ “Le Bar Guide” app, which allows customers to find the closest Stella-serving bar and figure out how to get there and how to get a cab home. Other uses have been to let a customer see what a product is like without having to purchase it first — Maybelline made an app that lets customers see how 30 different nail polish colors would look on their hands without actually having to put them on. These apps may have a “cool” factor, but so far, there hasn’t been much depth to them.

Most uses to date have also been meant for one person to experience, but CrowdOptic takes augmented reality to the next level of engagement. Fisher draws a parallel here between Web 1.0 and 2.0. Whereas early augmented reality was about “taking us into our own world,” the future will be about “group and collaborative experiences.” To him, the possibilities are endless — everything from media and entertainment, to “war fighters collaborating for missile strikes or police officers collaborating to catch criminals or crowds collaborating to collectively navigate a disaster.”

However amazing the potential uses for this technology, not everyone is a fan. Fisher described how on a recent visit to an elementary and middle school, after he explained what his company is able to do, some of the students told him they found the technology to be scary.

Augmented reality has come a long way in the last few years, and while it still has a long way to go, we are starting to see it enter the mainstream discourse, especially lately with discussions about Google Glass. The tech media has churned out countless articles obsessing over the features, rumors, and rumored features of what Google Glass might be able to do.  However, there has been far less discussion of what the larger societal impact of these devices might be.

Today it seems that everyone is hooked to their phones, obsessing over the momentary pleasures that the data streams that comprise our digital lives provide us. But this has so far been confined to the small screens we carry in our pocket or bag. Google Glass will remove these boundaries altogether. A few versions down the line, when the technology is more sophisticated, the market is crowded with competitors, and the use cases are more established, we won’t just be mentally “living in our own worlds,” we will be physically seeing different ones. 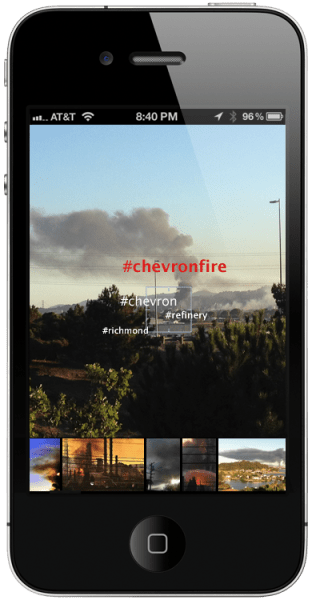 Above: An example of how augmented reality can be used to learn more about real-time events.

Augmented reality is a technology that alters the perception of reality by distorting it, allowing escape from it, and enhancing it — all at the same time.

These outcomes are not necessarily in conflict with each other. What technology like CrowdOptic’s shows us is that there is an entire space for shared experiences, it doesn’t have to be that we’re stuck in our own narrow field of vision — there are broader possibilities. But even with that said, once there is a widely used technology capable of measuring focus and tracking attention, the relationship between you and the devices around you changes for good.

In the meantime, we can all stand to gain from improving the way we share our experiences together. The “like” button is an incredibly shallow tool for expressing the complex appreciation, desire, and fondness we have for what we pay attention to. Instead of making us further removed from the world around us, augmented reality can build on it, leading to deeper, richer, and more personalized experiences – experiences that we can take part in together.

Tarun Wadhwa is a writer, researcher, and entrepreneur working at the intersection of technology and public policy. You can follow him on Twitter – @twadhwa – or contact him directly at VB@tarunwadhwa.com. Also, check out his upcoming book, Identified, which will be out later this year.