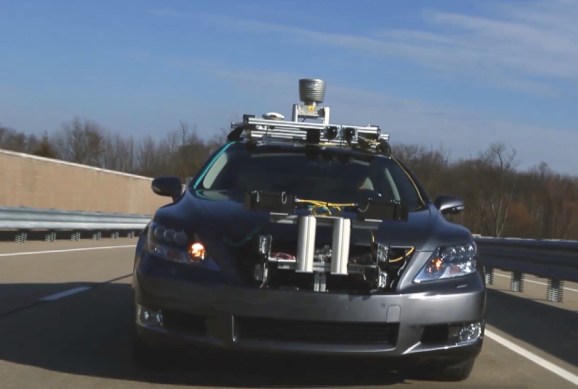 Intelligent cars are a hot topic in Silicon Valley. Around here, rather than ogle at celebrities, we ogle at Google’s self-driving cars.

And it’s not Google. Many car companies, including Toyota, BMW, and Honda, are actually working on self-driving cars, and the future looks to be playing out faster than anyone imagined.

Most of the connected-car news over the past couple weeks has focused on Google’s buy-up of social driving app Waze, but here are a few other innovations worth keeping an eye on:

Auto mechanic under the hood

One of my favorite near-future applications is Automatic, which is an all-in-one auto mechanic, driving instructor, and emergency response system.

The Automatic system takes readouts from your car’s computer for signs of wear and tear and recommends required repairs, while also using the accelerometer in your smartphone to monitor driving behavior and provide suggestions on how to drive more economically and safely.

Tech is also addressing one of the most irksome of driving problems: parking. Even in traffic-efficient cities such as San Francisco, drivers spend between 25 percent and 40 percent of their time behind the wheel in search of parking spaces or open garages.

This tremendous inefficiency, together with smartphone uptake, has given rise to a host of new technologies and applications that seek to reduce frustration, time and wasted gas.

One example, Streetline, makes inexpensive sensors that embed in parking places and can tell whether those spaces are vacant, creating a map of available spots which can be seen online or via a mobile app (called Parker) which provides voice guidance on where spaces are.

In a similar vein, there’s also VoicePark. Founded by San Francisco parking guru David LaBua, VoicePark provides turn-by-turn directions — albeit with the twist of focusing on finding parking places close to destinations rather than arriving at the destinations themselves.

Imagine being able to do anything on your smartphone from your car’s dashboard. That’s exactly what Volkswagen iBeetle, BMW Connected Apps, and Ford SYNC aim to do.

While you won’t be able to play Angry Birds or watch Netflix from your car’s dashboard anytime soon, with these three you can at least enjoy listening to your favorite music via Spotify or Pandora, access your calendar, or see what your friends are up to on Twitter and Facebook.

One of BMW Connected Apps’ coolest features is the fact that you can find where you parked your car via the Last Mile app. With Volkwagen’s iBeetle, just snap your phone into the Beetle’s docking station and you can listen to music via Spotify, have your text messages read to you (or even recent posts on Facebook) via “Reader,” or take pictures of your surroundings via “Postcard” and have them emailed to your friends for you.

One of the hottest topics that is currently being explored is turning your car into a Wi-Fi hotspot. With internet access in your car, you can access the weather, real-time news, fuel prices, and more.

T-Mobile and Audi have teamed up to offer drivers in-car Wi-Fi for only $15 a month with 30-month contract. GM and AT&T have also partnered to give drivers 4G LTE access in cars starting in 2014 with a cost of $299 a year.

While crowdsourced navigation is (reportedly) a $1 billion+ industry and self-driving cars continue to hog the limelight, just dig a little deeper to find a significant and growing ecosystem of smart cars and smart car apps.

Who knows — one of these could just be the next billion-dollar breakthrough.

Alex Salkever is currently global product manager of M2M solutions at Telefónica Digital. He is also an advisor InkWire and San Francisco Ambassador to Geekli.st. He was previously a technology editor for Businessweek and a senior for DailyFinance.