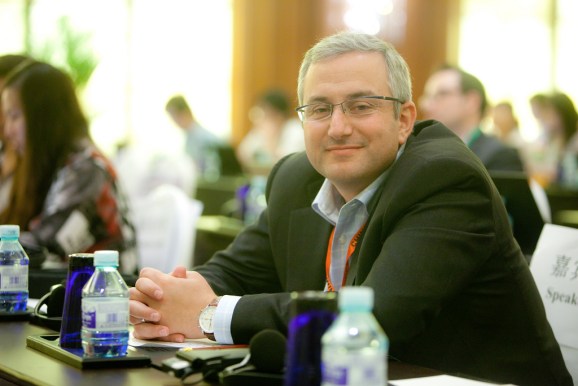 GRP Partners is doing the L.A. thing and getting a “facelift.” The Los Angeles-based VC firm has raised a new $200 million fund and is rebranding as Upfront Ventures.

Mark Suster heads up Upfront Ventures; he’s a well-known blogger and entrepreneur who sold his startup to Salesforce and joined GRP Partners in 2007.  Suster also founded LaunchPad L.A. He is an active blogger about startup advice, angel investing, raising venture capital, entrepreneurship, PR, sales and marketing, etc. In a blog post published this morning, Suster said that the VC industry is evolving and that he wanted to realign GRP’s branding to reflect a new, more modern ethos.

“We believe that our industry was too closed-door and secretive,” Suster said on his site. “Why should investors know all the tricks of the trade while first-time entrepreneurs operated at a disadvantage? We think transparency and easy access to information benefit our entire ecosystem. We also saw that the same types of entrepreneurs were repeatedly getting funded. VC has operated as an ‘old boys club,’ with access to capital often requiring entrance through an elite university engineering department in one of two cities.”

Upfront lists its core values as transparency, candor, point-of-view, and accessibility. The firm will put these words into action by blogging about issues that relevant to entrepreneurs, leading internship programs at universities, and running CEO summits and topical discussions groups on marketing, technology, recruiting, and so on. Upfront is also committed to investing in entrepreneurs from a range of geographies and backgrounds. Suster said two of the firm’s biggest exits were from women-led companies.

Upfront is also in the process of building an associate program that will work with portfolio companies rather than sourcing new deals. Over the past few years, VC firms have started hiring teams in-house that can work closely with the entrepreneurs to help them with sales and marketing, PR, and such. Andreessen Horowitz is perhaps best known for this, and other firms are following suit to show that they do more than write checks and attend board meetings. VC firms are also becoming more open about their communications, and Suster is not the only VC-blogger out there. Investors like Fred Wilson from Union Square Ventures, Chris Dixon, and Brad Feld are known for this, too. VC firms are now paying more attention to branding and establish unique reputations that will attract the most compelling entrepreneurs.

This is Upfront’s fifth fund. It’s last fund closed in 2012 at $149 million. The firm also announced relocating from Century City to Santa Monica, where there is a high concentration of startups.The new office has 12,000 square feet with inside and outside space and will also include a community work environment.