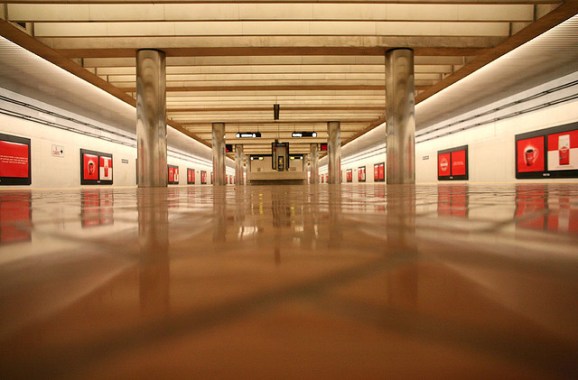 BART stations will be empty thanks to a strike that will shut down the entire train system Monday.

We don’t normally report on transit strikes on VentureBeat, but this one’s worth noting: The labor union representing Bay Area Rapid Transit is planning a strike starting Monday.

That means BART, which normally carries as many as 400,000 people per day throughout the Bay Area, will be shut down completely starting tomorrow. AC Transit buses, which are driven by members of the same union, will not be running either — so forget about taking the bus to cross the bay instead.

Union leaders have reportedly been seeking a 5 percent pay increase for each of the coming three years, while BART executives are offering just 1 percent per year.

The Mercury News has a more modest estimate of BART’s usual capacity: It puts it at just 5 percent of the region’s 3.8 million daily commuters. (The Merc also offers some helpful tips for avoiding the BART strike mess.) Still, BART and AC Transit are two of the major modes for crossing the San Francisco Bay from east to west, so anyone who lives in the East Bay but works in San Francisco will be highly inconvenienced by this strike. It will likely put a lot more cars on the Bay Bridge and increase commute times across the board.

In short, tomorrow might be a good day to work at home.

BART also has some tips on dealing with the strike. One possibility: BART is providing a limited charter bus service from some East Bay cities to San Francisco. Expect these buses to be packed, though.

Note: The BART strike won’t affect most people in Silicon Valley proper, because BART doesn’t go that far south on the San Francisco peninsula anyway. So anyone working at Yahoo, where chief executive Marissa Mayer recently put the kibosh on telecommuting, shouldn’t have any trouble getting to the office tomorrow.