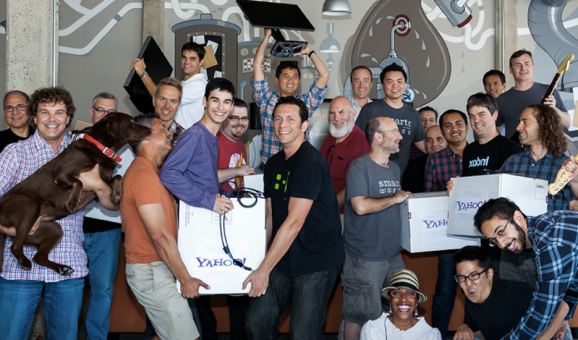 Yahoo has acquired e-mail inbox sanity provider Xobni for $30 million to $40 million. Xobni announced the acquisition on its blog today — as well as the fact that it will not accept any premium product purchases going forward.

Xobni has provided plugins and apps to manage your e-mail, highlight important messages, filter out spam, and contextualize messages from senders with social data from Facebook and Twitter. The company was started in an MIT dorm, went through Y Combinator, was proclaimed the “next generation of social networking” by Bill Gates, and launched Smartr for Gmail, iPhone, and Android in 2011, in which all e-mail analysis was shifted to the Xobni cloud.

There are some big changes in store due to the acquisition:

Essentially, most products are being extended, but no new clients are being added, and the future gets very murky and cloudy (hah hah) after July 2014.

The company announced the acquisition with almost saccharine-sweet I’ve-just-fallen-in-love terms, saying, “Did you ever meet someone who truly ‘gets’ you? That’s how we feel about Yahoo!” That’s very sweet, I’m sure, for Xobni executives and shareholders, but not so much for customers, who are essentially getting cut off sooner or later.

It’s a big day here at Xobni. We’ve been acquired by Yahoo!  At this moment, we’re unpacking our boxes from San Francisco and settling in to the new Sunnyvale space at Yahoo! HQ.

Before we talk more about that, a word to our current customers: Thank you. We know that Xobni products have woven their way deep into your daily life. Many of our product improvements have come as a result of your enthusiastic, detailed feedback. We often hear customers say “I couldn’t live without Xobni.” Not to worry — we aren’t pulling the rug out from under you. If you’re using a Xobni product today, you can keep using it. To find out our plan for each product, please check out the FAQ. Of course, soon you’ll be able to use Yahoo! products with Xobni goodness baked right in.

OK, back to the announcement.  Did you ever meet someone who truly “gets” you?  That’s how we feel about Yahoo!.  The power within every Xobni product is that it responds to how you communicate.  Every day you demonstrate who and what is important to you.  That can benefit not just your inbox or smartphone, but the many services you use.  Yahoo! gets that, and they want us to use our platform to make many Yahoo! services better for you. This is just the type of gig we’ve been preparing for throughout our history.  We look forward to letting the results speak for themselves.  Stay tuned….

Xobni did not release details on the value of the acquisition, but All Things D reported that it was between $30 million and 40 million.

The big question: What will Yahoo do with Xobni? The new acquisition works with Yahoo rival Google’s Gmail as well as Apple’s mail offerings, and though it could improve Yahoo’s own webmail client, it would lose a lot of users who may refuse to switch from Outlook, Gmail, or other mail providers.

This is just the latest in a long string of Yahoo acquisitions under Marissa Mayer. She’s already snapped up at least eight companies in 2013, including Astrid, PlayerScale, and, of course, Tumblr. Each of the first six companies Mayer has acquired have been shut down, though Tumblr won’t be.

But it looks like Xobni will follow the six as Yahoo appears to be basically shutting down its product business.