Every startup wants to absolutely “crush it” right out of the gate. Sometimes, that’s a really, really bad idea.

“Two weeks before we launched, we hit 250,000 sign-ups,” Babblr cofounder Brandon Sowers told me. “People were talking about it on buses in Ukraine!”

That turned out to be a very bad thing.

Sowers and his cofounders built Babblr because they wanted something more out of Tumblr. The supersimple blogging startup has 108 million blog and 51 billion posts, but what it doesn’t have it real, live, synchronous chat. And Sowers, who with his cofounders has 700,000 followers, wanted to talk to them. The team figured they could make it happen, even on what is now Yahoo’s site, via a Chrome browser plugin. 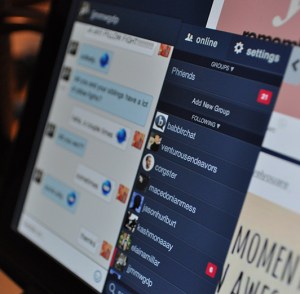 “We mocked up a screenshot, got 25,000 sign-ups in 24 hours,” Sowers told me. “It took us six months to build working day and night … we didn’t really have any boundaries. Then we put on a landing page with a countdown, hoping to double and get 50,000 people before launching.”

As it happened, 50,000 turned into 250,000, and on launch day in early April, 20,000 of them joined the launch livestream. Three minutes before it went live, one of the developers found a glitch and told Sowers they couldn’t launch. Nervously, he chatted on the livestream while it was fixed, but even before the official announcement, 2,000 Tumblr users discovered it and were starting to chat. Finally the glitch was fixed, and he announced Babblr was live.

That all sounds great, and it was, but only for a few minutes. Unknown to the development team, a memory leak in the application’s authentication step started “tearing down the infrastructure” of Firebase, Babblr’s hosting provider, which also hosts services like Klout, BitTorrent, and Codecademy. Firebase “couldn’t react quick enough,” Sowers says, and after three hours in which the rest of their customers’ services were at risk, shut Babblr down.

“We were all wondering what the hell just happened,” Sowers told me. “One hour we were ready to drink a beer and celebrate, the next we’re going through the worst nightmare of our lives.”

Quickly the team issued a formal apology, although it hardly dissuaded Tumblr’s young and vocal users from trashing Babblr. Cloud infrastructure company Realtime.co, which handles 90 million user connections daily, with hundreds of thousands concurrently and over 400,000 messages per second, asked if they wanted help, as did other developers, and within days, dozens of developers were helping them diagnose the issues and fix them.

The result was another launch — this time a soft launch — a month later in early June.

This time the softer launch and the extra application hardening resulted in success. More modest success, perhaps, with 15,000 downloads of the Babblr Chrome extension in the first day, but no crashing. 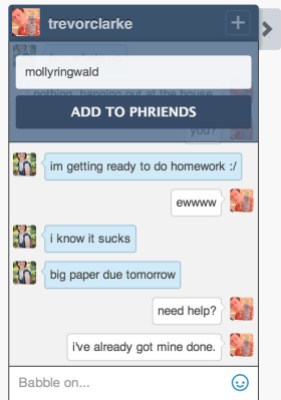 “After three or four days we started seeing the trend on Tumblr going from negative to really positive,” Sowers says. “Since then, we’re growing at a really good organic rate, and are now hitting 100,000 downloads.”

That was a couple days before the July 4 long weekend. At the start of the weekend, Sowers told me Babblr had hit 127,000 downloads and the site was going viral with 27,000 visits.

“Now I can finally sleep,” Sowers says. “It’s still in beta, but we’ve been able to battle through that storm, and now people are promoting it.”

A successful chat product for Tumblr that really catches on will be a massive win for someone. Tumblr is ninth on the list of most-popular U.S. sites and has 217 million unique monthly visitors, along with 16 billion monthly pageviews. The site has barely started to monetize, and adding features like chat could make it even stickier and more lucrative.

Of course, there is the small problem that it is owned by someone else.

But Babblr’s goal, Sowers, says, is to show Yahoo what a great chat experience for Tumblr looks like — and what the Tumblr community wants in one. It’s a new kind of chat — blog with blog more than person with person — but with traffic like Tumblr’s and a young engaged demographic of high school and college kids, the potential is massive, perhaps even for some kind of Yahoo acquisition.

First, though, Babblr’s got to prove that it can get out of beta, improve its user experience, and validate its first-launch potential by continuing to scale. Sowers is optimistic.

“We’ve been able to prove that Babblr has a great footprint,” he says. “And we understand the Tumblr community.”