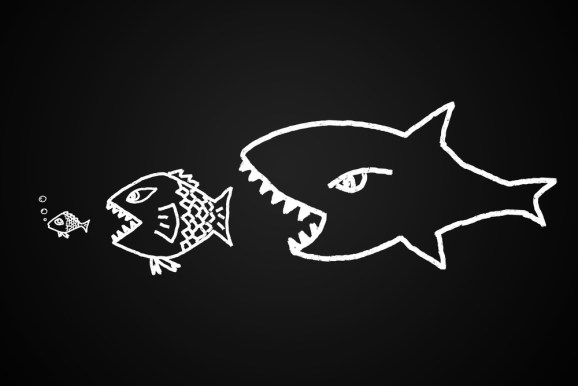 It’s amazing to think it’s been just six years and seven versions since the iPhone launched in June, 2007.

A lot has changed in those six years, and perhaps one of the most significant changes has been wireless carrier consolidation.

The latest we’ve seen on this front is T-Mobile and MetroPCS’ union and SoftBank’s pending acquisition of Sprint, which is set to be approved. And with Verizon allegedly looking north towards acquisitions in Canada, it looks like operator consolidation will start to extend across borders.

In 2003, an operator market share chart for the US wireless market looked kind of like an erratically sliced pizza. Sprint, T-Mobile, and Nextel were all clustered together between 12 and 16 million subscribers, and the top 3 carriers (Verizon, AT&T, and Cingular) had a combined market share of 43 percent. The top four (Verizon, AT&T, Cingular, and Sprint) had a combined market share of 63 percent. There were about 160 million wireless connections in the U.S. market. (CTIA keeps a handy statistics page here.)

One reason for the consolidation is scale and reach. This is compelling for smartphone makers, and it helps larger operators get magnet handsets earlier. When the iPhone first launched in 2007, it was only available on AT&T. As a means of attracting subscribers, it worked. Verizon’s churn would go up during a quarter when AT&T launched an iPhone, indicating that it was losing subscribers to AT&T.

By June 2009, AT&T had merged with Cingular; Sprint and Nextel had merged; and Verizon had acquired Alltel, which itself had acquired Western Wireless. There were now two mega-carriers with over 75 million connections on their networks. There were about 275 million connections, and the four major carriers of AT&T, Verizon, Sprint, and T-Mobile had 90 percent market share. Sprint, Verizon, and AT&T had 79 percent total market share combined.

As of December 2012, the top 3 carriers had about 80 percent share, and the top four (in order: AT&T, Verizon, Sprint, and T-Mobile) had 90 percent share. Total wireless lines had grown to 326 million, again per CTIA.

With T-Mobile and MetroPCS’ union now complete, the share of market held by the Big Four now is about 93 percent.

Note that this does not represent a higher level of consolidation than most developed wireless markets, where consolidation into three major operators (e.g., KDDI, DoCoMo, and SoftBank in Japan; SKT, LGT, and KTF in South Korea) is common. Some call this the Rule of Three.

Smartphones, in the form of BlackBerries or Palm OS-based devices, certainly predated the iPhone in the U.S. market. As shown here, consolidation most certainly did as well. But “modern” smartphones, i.e., the iOS, Android, or Windows Phone-based mobile computers of post-2007, have exacerbated this consolidation trend.

In the U.S., wireless phones are generally sold through your carrier, and they’re bundled with a service contract, most likely of two years. (Prepaid service, which is more common in the EU, has grown in share in the past 5 years, and will be the subject of a later post.) Your smartphone is most likely sold at a subsidized price, such that a subscriber can walk out of the store with an iPhone 5 (which can cost as much $600 to the carrier) for $99 or $199, as with T-Mobile’s recent iPhone 5 campaign. In essence, the subscriber has received an interest-free loan of $300-$500, depending on the operator’s handset acquisition cost. $400 is a good ballpark for this subscriber acquisition cost.

Thus, smartphones have rewarded scale and capital. Those operators with the wherewithal to front the immense capital required to activate several million smartphone subscribers in one quarter have been rewarded. Note the dip in AT&T Mobility’s operating margins with each holiday quarter, which reflects the large number of smartphone activations in that quarter. As of March 2013, 1 percent of operating margin for AT&T translates to about $166 million dollars. The 13.5 percent swing seen in the chart below between Q4-2012 and Q1-2013 thus translates to about $2 billion, mainly in holiday subscriber sign-up costs.

The iPhone launch and success on AT&T begat Android’s success as an alternative. (Think back to Verizon’s “Droid Does” campaign in 2009.) This begat the OS duopoly we now see in the U.S. market and exacerbated the subsidy burden required to get high-end smartphones to consumers at a take-home price of $99-$199.

Sprint and T-Mobile, which are less capitalized than AT&T or Verizon, have been very candid about the subsidy burden. Sprint’s Dan Hesse, keynoting the Open Mobile Summit in 2010, acknowledged that “bright shiny devices” had become the marquee element in subscriber acquisition, and with regards to smartphone subsidies, commented “something’s got to give.” T-Mobile’s recent move to “no contract” is a direct result of subscriber acquisition costs due to smartphone subsidies. Note that T-Mobile’s “no contract” plans still have a contract, and one that makes the payback of the handset subsidy quite transparent. Early termination fees have long been an unloved part of wireless service, and they are a reflection of this subsidy.

Given that SoftBank’s proposed acquisition of Sprint is set to move forward, consolidation is now extending beyond national boundaries. One of the potential synergies cited in a SoftBank-Sprint union is additional scale for handset procurement. To get marquee, magnet handsets that drive consumer traffic into stores, this scale is imperative.

Other channels for native app developers include direct carrier distribution (e.g., KDDI’s Smart Pass), other app stores such as Amazon’s, and those of handset makers. The mobile web, in theory at least, allows worldwide distribution for web-based services. Thus, operator consolidation has not necessarily led to diminished channels for developers. (OS consolidation, on the other hand, may have.) Conversely, it may create opportunities to reach larger sets of users through one carrier.

For network equipment providers and handset makers, the story differs. Operator consolidation means consolidation of potential customers for both of these categories, potentially offset by larger potential orders with a larger operator.

Note that for handset makers in the U.S., operators are still the dominant channel for handset sales, since handsets are typically purchased with a service contract as described above.

Jon Metzler (Twitter: @jonjmetz) is Founder and President of Blue Field Strategies, a consulting firm based in San Francisco focusing on the wireless, broadcast and digital media sectors. Blue Field Strategies provides a variety of U.S. and Asian telecom and media clients with market, policy and strategic consulting services, including due diligence, market assessment and market entry, policy assessment and advocacy, and organizational development.