Soon your car won’t need you to drive thanks to the increasingly competitive field of automatically driving cars.

Mobileye has raised $400 million at a $1.5 billion valuation for its driverless car technology. The company’s Advanced Driver Assistance Systems (ADAS) use a single camera and a “system-on-chip” to instill cars with warnings for pedestrian collision, lane departures, and forward collisions as well as headway monitoring, intelligent high-beam lights, traffic-sign recognition, adaptive cruise control, and speed limit indications. The machine-vision technology is intended to keep drivers and passengers safer and decrease traffic accidents.

Self-driving cars are one of today’s hottest technology trends. Google revealed that it was developing self-driving cars in 2010, and since then, these vehicles have logged hundreds of thousands of miles with few accidents and received approval from Nevada to test is cars on the state’s roads. Car makers such as Tesla, Audi, and Toyota have since started developing driverless solutions of their own, and GPS-maker Garmin revealed its new heads-up display (HUD) gadget today that projects key navigation information on your car’s windshield — a safer alternative to looking down at your smartphone while driving. 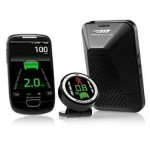 Autonomous driver systems are still in the early stages of development and too expensive for the mainstream market, and the race to be the first for mass consumption is heating up. Mobileye cofounder and CEO Ziv Aviram told the New York Times that Mobileye’s system is the “most cost-efficient system that’s out there.” Google’s system is more complicated, involving sensors, cameras, radar, and software, while Mobileye’s is just a “camera and a chip.” Aviram said the ultimate goal is to build a vehicle that can run mostly on autopilot by 2016, but a completely driverless system is still 15 years to 20 years away.

Aviram and cofounder, professor Amnon Shashua, founded Mobileye in 1999. The company is working with BMW, GM, Volvo, Hyundai, and it has impleentned and launched its technology in the BMW 5-Series, 6-Series, 7-Series; the Volvo S80, S60, XC70, XC60 and V70; and GM on the Buick Lucerne and the Cadillac DTS and STS. Mobileye has also formed strategic partnerships with corporations like Delphi, Continental AG/Simens VDO, and Magna Electronics to support production.

About 34,000 people died in the United States from traffic fatalities in 2012. Smarter cars have the potential to dramatically decrease these numbers. The National Highway Traffic Safety Administration estimated that self-driving car technology could prevent or reduce in severity as much as 80 percent of crashes involving non-impaired drivers, although about a third of highway fatalities are alcohol-related. In May, the NHTSA released a policy intended to advance the testing and development of self-driving cars, encouraging states to pass laws that allow testing of these vehicles. The Transportation Department has also spent millions of dollars in research developing technology together with the auto industry.

Mobileye will use this hefty round of financing to continue development and testing of the technology and bring its product to markets around the world. The financing reportedly came from five investors — BlackRock, Fidelity Management, Wellington Management, Chinese investment firm Sailing Cpaial, and Enterprise Rent-A-Car. Bloomberg reported that the equity sale allowed early investors to exit and brought in more prominent stakeholders who can help the company move toward an IPO

Mobileye’s main development center is located in Jerusalem and is one of the world’s largest machine vision development centers, according to the company’s site. It also has offices in the Netherlands, U.S., Japan, and Cyprus. It previously raised $100 million in 2007 from Goldman Sachs.