If you still hate going to conferences, it’s probably because those conferences aren’t using Bizzabo.

Bizzabo cofounder Alon Alroy (pictured above) says that the app’s goal is simple: Just like Yelp is known for restaurant reviews and LinkedIn is known for professional networking, Alroy wants Bizzabo to be the go-to conference app for both event planners and attendees.

“Most startups will say that you need to have one customer in mind and be the best at that. In the event [sector], if you don’t cater to attendees, organizers, and sponsors, you’ll fail,” Alory told VentureBeat in an interview last week.

To understand Bizzabo (and, yes, competitors like OleaPark), you first have to understand just how awful the conference experience can be for just about everyone involved.

Think about it from the vantage point of attendees, who often pay a hundreds of dollars to go events with the hopes of meeting some lead-generating contacts. The problem? Actually meeting valuable contacts depends largely on your ability to find them in lines or at booze-fueled networking cocktail sessions. Bizzabo, however, turns that dynamic on its head: By allowing Bizzabo users to see and connect to other conference attendees using the app, Bizzabo lets them plan their meetings rather than let those confabs happen by chance. 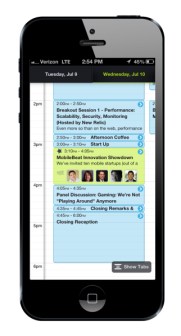 “When you go to a conference, you don’t want to stumble on things — you want to maximize your return on investment. We want to help you make better use of your time,” Alroy said.

Bizzabo is a big deal for event planners as well, as it offers them a wide variety of key features for their events — online agendas, more sponsorship opportunities, event-focused social networks, push notifications, and even ticket sales through Bizzabo’s Eventbrite integration.

Best of all, though, using Bizzabo means not having to pay developers to create dedicated events apps — which means Bizzabo saves conference planners significant cash.

While the basic version is free for organizers, Bizzabo also offers more advanced options, which vary in price based on how many sponsors an event has or how many real-time notifications organizers want to send out.

So far, this approach is working pretty well. Since launching in 2012, Bizzabo has been the go-to events app for over 3,000 events around the world, including this year’s CE Week in New York City and the Dublin Web Summit, the latter of which drew 3,000 attendees. (In full disclosure, Bizzabo was also the official event app for this year’s MobileBeat conference.)

Bizzabo has been successful on the funding side as well: Last July it raised $1.5 million, and it’s currently pursuing another round.

But as impressive as Bizzabo is, Alroy confesses that the company still needs to get the app in front of more organizers’ eyeballs.

“Once we show a demo, we’re pretty close to 90 percent in terms of customer conversions. The challenge now is getting it in front of organizers in the first place,” he said.