Once Venice was the capital of global glass-making. Now, wearable computing pioneer and GlassUp CEO Francesco Giartosio is hoping that lightning will strike twice.

Two years ago Giartosio started an augmented reality project called GlassUp in Venice with a scientist who built heads-up displays for the Italian air force and an engineer who managed smartwatch projects. Together, they wanted to create a revolution in wearable technology: an always-visible smart display that doesn’t make you look like an cyborg.

Then they heard Google was doing the same thing.

“It was quite a shock,” Giartosio told me via video Skype from Venice, where the company is headquartered. “We considered that they would kill us, so we thought deeply about it, then decided to carry on for a few reasons.”

Those reasons include cost, fashion, and, most importantly, function.

GlassUp is a second-screen output for Internet-connected devices, the company says. It will show you SMS messages, emails, notifications, or anything a GlassUp-optimized app wants to display. It doesn’t contain a huge amount of electronics, or a heavy-duty CPU, and — as privacy advocates will be pleased to hear — doesn’t have a camera.

As a result, it has a few advantages over its more famous relation.

But don’t think of GlassUp as a budget Google Glass. Equally important, Giartosio says, is that they look like an ordinary pair of glasses. Perhaps “ordinary” is the wrong word: 98 percent of all eyeglass frames are designed in Italy, and GlassUp has quite a distinctive look, as you would expect from the home of fashion.

The most important distinction, however, is a matter of function, not fashion. That’s where the air force scientist, Gianluigi Tregnaghi, came in handy. 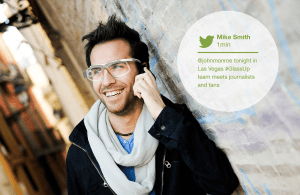 “What Gianluigi learned from designing heads-up displays, it is important to have the information near the center of the field of view,” Giartosio says.

Google Glass, of course, has information off-center, near the top right of your field of vision. GlassUp says that feels “unnatural,” like looking in a rear-view mirror all the time. That causes strain on your eyes, Giartosio says, and it could also be dangerous for cyclists or athletes who are using Glass during training or competition.

In addition, because GlassUp is in the form of high-fashion eyeglasses, prescription versions are planned. That means that you don’t have to try to layer Glass over glass if you want to wear corrective vision lenses and an augmented reality set.

One other advantage? Battery life.

Because it uses low-power Bluetooth and displays notifications in monochrome, GlassUp will have a battery life of 150 hours standby and eight hours of constant use. While Google Glass will certainly improve in the eventual consumer version, GlassUp could have as much as a four- to six-hour battery advantage.

There are obvious consumer implications, Giartosio says, including head-up info for runners and cyclists. But, much like another Google Glass competitor, Recon Jet, there are also numerous pro and industry possibilities.

“Museum are interested, so visitors can see captions of the paintings, and more information,” Giartosio told me. “We’re seeing requests from companies who do maintenance, warehousing, and other things … every day we get new requests.” 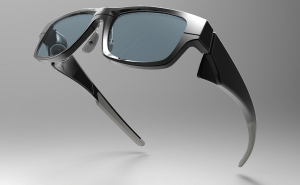 Above: GlassUp – yet another style

The company has started an Indiegogo campaign as a way of launching GlassUp and is currently talking to investors — some of whom have already come on board — about international expansion. The Indiegogo campaign is in its early days but has already raised over $14,000, and any orders will save you $100 on the eventual purchase price, as a GlassUp, prescription or non-prescription, is set at the $299 contribution level.

There’s an open API for developers to make their apps GlassUp-compatible, and that has just been released in private beta. There’s also been one GlassUp hackathon in Milan already.

How Google reacts to this is not entirely clear, although the bigger company certainly doesn’t like the name GlassUp, and has already asked GlassUp to change it.

As far as Giartosio is concerned, however, the competition was actually a blessing in disguise.

“It has brought us a lot of publicity,” he told me. “Before Google Glass, everyone said our project was a silly project … and if there is competition there is also an exit opportunity.”

There’s room for multiple competitors in the suddenly-exploding wearable computing space. GlassUp sounds like it might be doing just enough, in a simple enough way, to avoid the bridge-too-far problem we often see with leading-edge technology.

And, as such, it might prove to be a worthy competitor to its more famous but similarly-named rival.