For Simple, an online bank trying to overthrow the tyranny of traditional banks, its biggest milestone couldn’t have been timed any better.

Today the company is celebrating the first anniversary of its official launch, and it’s also announcing that it’s now processing more than $1 billion in transactions per year. That’s not a shabby figure for a bank that only has 40,000 customers (with many more potential users wait-listed), and it’s as clear a sign as any that Simple’s combination of data-rich apps and humanized customer service should have the big banks taking notes.

Simple, formerly known as BankSimple, completely replaces your bank. The company has partnered with Bancorp to handle all of the typical banking chores, which lets Simple focus on building a better banking customer experience. Once you sign up, you get a branded Visa debit card, which functions just like any other debit card. Simple gives you instant access to purchase data, both online and through apps, as well as tools for budget planning. The company also doesn’t charge any sneaky banking fees for things like account maintenance, carrying a low balance, or even for overdrafts.

“We were kind of nervous when we launched last year that people wouldn’t get it,” said Joshua Reich, founder and chief executive of Simple, in an interview with VentureBeat. “The real hope with these features is that we could do something that people have been trying to do, but that’s been difficult to do.”

His biggest regret for the first year? Not offering check depositing via the company’s mobile apps at the beginning. (The feature was eventually added late last July.) As Reich tells it, he personally found checks “so bizarre” that he was hoping to push users away from them — but of course, that’s an extraordinarily lofty goal for a small startup.

After four years of planning, Reich noted that the company also over-prepared in one key area. “We went to a lot of effort to build the largest fee-free ATM network in America, but our customers aren’t really using it,” he said.

It’s actually a good sign that Simple’s ATM network is being underused — it proves that the company’s big bet on providing extensive financial data to consumers is paying off. (If you pay for something with cash, it doesn’t get neatly added into your Simple account. You have to enter it by hand.) 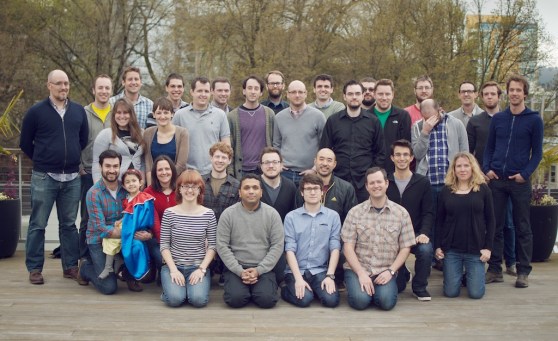 Above: The Simple team

Simple also revealed today that its users have saved more than $100 million for their Goals (which are typically big-ticket expenses like saving for a down payment on a house, or paying off a student loan bill). You can set up Simple to automatically put a certain amount of funds towards your Goals every month, which should ideally make saving more seamless.

In its first year, Simple has added a slew of new features — including the ability to easily block your debit card and extensive reports around your spending and saving habits. The company also announced a partnership with Braintree for its Venmo Touch mobile wallet last week, which makes it dead simple for Simple users to pay for things across Braintree partners.

Going forward, Simple plans to continue marketing itself as a humane alternative to traditional banking. Judging from its performance so far, it won’t need to try very hard to tempt away bank customers. Big banks are rushing to make their online and mobile services more appealing to customers, but there’s little chance they’ll give up on their addiction to fees. And while credit unions are a better option, they’re not available everywhere (and they typically don’t have modern online services).

Portland, Oregon-based Simple has raised more than $15 million from IA Ventures, Shasta Ventures, First Round Capital, and others.

“[Simple] is what this country needs — it’s the way you should be thinking about your money,” Reich said as he recounted the company’s success over the past year. “I have a hell of a lot of confidence we can get even further out.”