Google just debuted a new streaming media stick called Chromecast that beams what’s happening on your smartphone, tablet, or laptop to your television.

The search-and-media giant debuted Chromecast at a press event this morning in San Francisco. The new device brings Apple TV’s Airplay-like functionality for both Android and iOS mobile devices. Oh, and instead of charging $50 to $100 like the cheapest Roku model or Apple’s Apple TV, Chromecast is only $35. That’s insanely cheap for what it does.

Check out our first look at Chromecast for our hands-on observations and a dozen photos of the device and its interface.

Google first showed off the functionality of Chromecast with YouTube, which not only pushes videos you’re watching to your TV screen but also automatically changes to the correct input. (The demo video made it look like a pretty seamless process that will make you wonder how you ever managed to kill 15 minutes watching YouTube videos while sitting on the couch in front of your television.)

Obviously, this is a nice perk for video, but it also streams music and media from individual tabs via Google Chrome web browser on laptops. The company said most Macs and Windows 7- and 8-ready laptops should be compatible with the Chromecast functionality. We don’t have a full list of supported devices, but at the $35 price it seems very likely that Google will bend over backwards to make Chromecast compatible for everyone who wants to use one, regardless of how old their gadgets are.

Chromecast will connect to your television via an HDMI port, but still requires that you plug it to an external power source via a USB power adapter. The requirement of external power (meaning, having to plug it into an electrical socket) is pretty standard among set-top boxes, although Google didn’t show the cord in its product shots. (I’m guessing the reason Google did this is because it makes the device look far less attractive.)

The device should be available by Sunday, July 28 through a variety of online stores, including Amazon, Google Play, and others. Google is also offering three free months of Netflix service for new and existing subscribers to anyone who buys a Chromecast, too.

This definitely answers some questions about why Google has been relatively silent about new developments on its Google TV platform. It also pretty much guarantees Google has no intention of ever selling the $300 Tron bowling ball that was the Nexus Q, which debuted last year at Google’s developer event.

We’ve embedded a gallery of  Chromecast images below. Are you considering buying one? 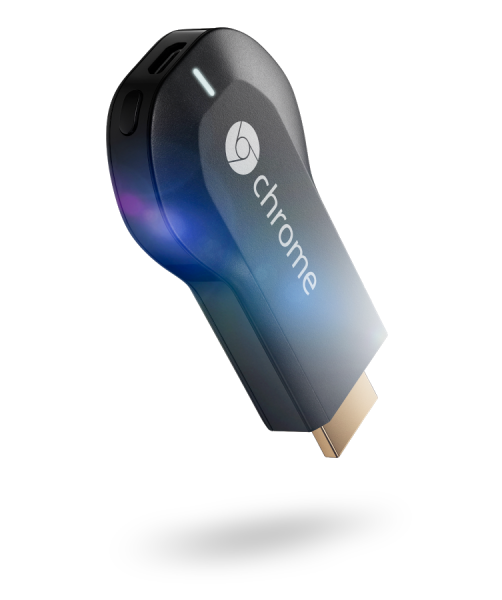