Travel startup GetGoing has already attracted attention when it comes to giving people smarter ways to search and find flights. Now the service has added a powerful but simple hotel search so you can book flights and hotels on the same site.

GetGoing launched out of beta in early March with its somewhat gimmicky “Pick Two, Get One” service where leisure travelers pick two destinations and get one at lower-than-regular cost. But a little over a month after that, it launched the powerful FlightFinder service that gave travelers more ways to save money without having to roll the dice on their final destination.

Four months after launch, GetGoing is now serving “millions” of flight searches each month. It says the number one request from its customers has been to add hotel search and booking. So it followed that feedback and has how added hotel search thanks to a partnership with Expedia. More than 140,000 hotels around the world can now be booked using the service.

But, you ask, why would you use this over Expedia if it’s the prices and list of hotels are the same? GetGoing CEO Alek Vernitsky told me he believes his service’s new hotel search is simpler and easier to use than Kayak, Hotels.com, Trivago, Priceline, Orbitz, and other players. He even said it’s easier than Expedia. Specifically, GetGoing has stripped out some user-interface elements in hotel searches and put it all into a clean setup.

“We set out to make search better,” Vernitsky said. “With GetGoing, you’ll do less searching and less time is needed. … It’s like the difference between shopping in a clean store versus a messy store.”

This is just the beginning for GetGoing’s foray into hotels. The company felt like it needed to do something with hotel search just to get the startup on the same page as as other travel sites. But come September, Vernitsky said, the company will innovate in the hotel space like it has done with flights.

“We will offer substantial pricing advantages over Expedia, Priceline, and Kayak,” Vernitsky said.

Take a look at GetGoing’s new hotel search in the screenshot below. 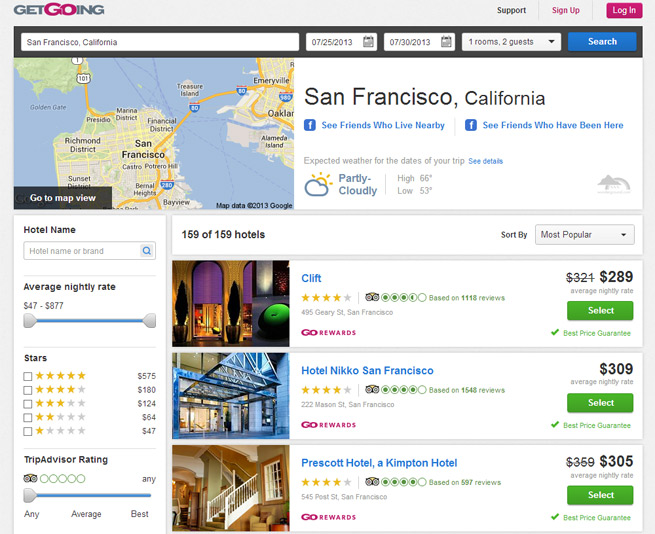