The latest data is in, and Android fragmentation is worse than ever.

So says app maker OpenSignal, which has spelled out in dizzying detail just how many different Android devices are being used today.

Via its eponymous app, OpenSignal helps users find the best Wi-Fi networks and cell signals for their devices. After looking at the 682,000 Android devices that downloaded the app this year, OpenSignal found that 11,868 them were completely distinct. That’s a big increase over last year, when the company saw only 3,997 distinct devices.

The situation is even more  interesting when you consider which version of Android those devices are running.

According to Google’s own numbers, only 37.9 percent of Android devices are running Jelly Bean, the latest version of Android. That number is only slightly higher than that of Android 2.3 Gingerbread, which still commands a 34.1 percent share in spite of being released in 2010.

While that should tell you all you need to know about the still-sad state of Android fragmentation, often the scale of this sort of thing makes more sense in pictures. Take a gander at OpenSignal’s chart. 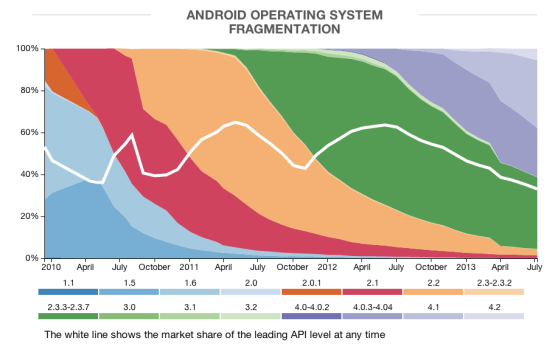 But the situation is not all bad, as OpenSignal points out. “The availability of cheap Android phones (rarely running the most recent version) means that [Android phones] have a much greater global reach than iOS, so app developers have a wider audience to build for,” the company says.

Essentially, the biggest benefit of fragmentation is that it lets smartphone manufacturers sell people a variety of phones with different feature configurations and prices. Fragmentation, at its core, is about choice.

And that is sort of the oft-forgotten point here. While developers wring their hands about Android’s fragmentation, it’s that tendency towards fragmentation that’s allowed the operating system to capture as much marketshare as it has.

Oh, and in case you were curious how all of this compares to how iOS is doing — well there’s no comparison at all, as the charts below show.