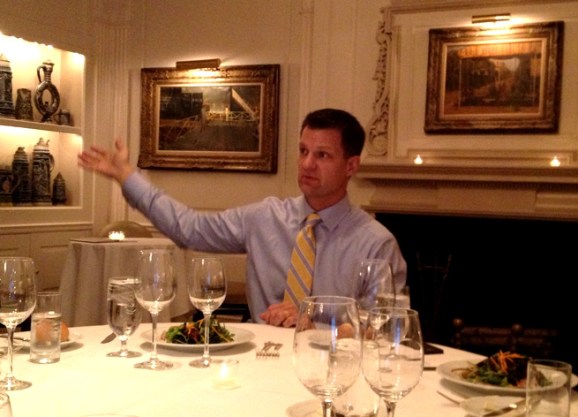 NEW YORK CITY — SAP is best known for being a serious but stodgy player in enterprise software, but it’s made a lot of noise in the past months about HANA, it’s so-called “billion dollar” “big data” solution.

For those that haven’t been paying attention, HANA (High-Performance Analytic Appliance) is an in-memory database technology that can store terabytes worth of data and cruise through that information at swift speeds. SAP talks a lot about HANA and believes that even though it’s expensive, massive enterprises interested in big data will bite.

But SAP senior vice president and platform head Steve Lucas says his company hasn’t done enough in big data and is taking its commitment to another level, one that others players in the sector wouldn’t appreciate.

“SAP needs to set its sights on new directions in analytics,” Lucas said at a small press dinner last night in New York City. “We’re going to make life miserable for our competitors.”

One competitor whose name was thrown around at the table was Tableau Software, a young big data business that had a hugely successful IPO this past May. Tableau recently made some noise itself just a few weeks ago by moving its software to the cloud. Asked if SAP would consider buying Tableau, Lucas went in the opposite direction.

“We aren’t going to buy Tableau,” Lucas said with a smile on his face. “There’s no need to buy an overvalued software company.”

Rather, SAP wants to crush companies like Tableau and all other analytics products focused on high-end businesses. Lucas said from here on out SAP would focus on the following four areas in big data and analytics:

SAP has been working in business intelligence for a long time, but Lucas said that other companies had stolen “that mantle” away from SAP. The company offers its BusinessObjects BI solution for accessing analyzing data, performance tracking, and more.

“Business intelligence is our birthright,” Lucas said. “You can’t walk away from 60,000 customers.”

Lucas and business intelligence marketing lead Jason Rose spent the most time during the dinner talking about the category of “agile visualization.” Specifically, they talked up Lumira, a data visualization app backed by the power of HANA. Lucas said Lumira has “hundreds of customers,” but the company is doing more to get other folks to try it. That includes making Lumira’s personal edition free as of Monday.

“We want to use Lumira and agile visualization to push SAP into new areas and really seed the market,” Rose said. “It’s the idea of getting SAP brand more well known; it’s the idea of allowing people to do better analytics and visualization and getting them onboard to a broader SAP platform in the future.”

While Lucas didn’t spend much time on this category, he basically inferred that advanced analytics involves “much harder math” — the sort of number-crunching that HANA would be capable of but other solutions wouldn’t. That means things like superpowered database search and sentiment analysis.

“HANA is not just a database — it has an analytic, predictive library built into it,” Lucas said. “It also has text engine in it. You can tell HANA to ingest massive amounts of text — newsfeeds — and HANA can literally scan that text. It can, for lack of a better way to say it, index or build structure around that text. … We dumped the whole U.S. patent office database on to HANA so you can get a less than one second query across looking at every patent that’s ever been filed.”

Another example of advanced analytics and HANA’s power is the NBA’s deep statistics website. NBA chief information officer and VP Michael Gliedman was at the dinner and said HANA had enabled real-time input and detailed number-crunching of player statistics.

“We had a stats website for years, and it was flat,” Gliedman said. “Dolling up the user interface isn’t what we were going for. What we were going for was so anyone could ask anything. What does this team look like after five days on the road? Let me see how this guy plays after one day of rest or two days of rest.”

While Lucas and SAP may be talking the talk more than actually walking the walk at this point, the talk is effective and full of swagger. The company is pushing HANA and other software into the cloud and now shows a willingness to trash talk much smaller competitors. This is the tone of a company that knows it needs to reinvent and innovate again.

“This is the beginning of a new era for SAP as we shift our focus from the analytics tools of the past to looking toward the future,” Lucas said on a final note. “We’re shifting the company away from what we had 15 years ago.”