Many spend their freshman year of college sleeping through Psych 101 and drinking cheap beer at parties. Nithin Tumma, James Ruben, and Neel Patel, however, dedicated their first year to building a startup.

This trio of Harvard freshmen launched Side on the Apple store today. Side is mobile application that prompts you with simple, two-choice questions, then recommends products and services based on your responses. You answer a series of two-choice questions about yourself, such as “where would you rather raise your kids” — city or country.

Side also connects with Facebook in order to pose questions about your friends, like “which car will Nithin be driving in 10 years?” or “which is a better first date activity for Neel?” People using the app can also create their own questions. 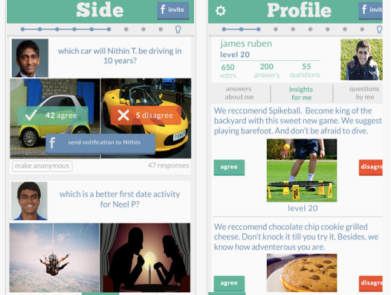 “At their core, recommendation algorithms are supposed to be a platform for discovery,” Ruben said to VentureBeat. “However, because the current models are only based on a very particular part of your character–what you’ve been looking at online–they fail to really ever provide personalized suggestions. At Side, we understand that a friend’s opinion is a far more powerful and important indicator of who you are and what you like.”

Rather than remaining frustrated with current recommendation engines, Tumma, Patel, and Ruben set out to build their own. Tumma and Patel met during high school at various science competitions, including the Intel Science Talent Search, where Tumma won the $100,000 grand prize for his research on cancer, as well as the Intel International Science and Engineering Fair, where Tumma placed first and Patel placed second. Tumma and Ruben were assigned as freshmen year roommates at Harvard, and the three immediately started “hacking away.” They were later selected as the youngest long-term residents at the Harvard Innovaton Lab and were named first-place winners in the Harvard Innovation Challenge.

Somewhere amidst all that award-winning and college-going, the trio created Side. They are the youngest team in the Summer@Highland startup accelerator program. The Summer@Highland program is run by Highland Capital partners to nurture student founders. Selected entrepreneurs get an $18,000 stipend, mentorship, and  attend a speaker series featuring well-known entrepreneurs.

Highland’s director of marketing Amy White said this program is part of a larger trend of students wanting to build their own companies from scratch, rather than joining an established one. It was first started in 2007, and since then 85 percent of its alumni teams are still in operation or have been acquired. Collectively they have raised nearly $100 million in venture capital.

Despite its founders’ brilliance and their powerful backers, Side faces steep challenges. Even seasoned entrepreneurs struggle to gain traction for mobile applications and the app store is a highly competitive and crowded place.

For example, there are other apps out there that take a comparable “social” approach to collecting information. Seesaw lets you ask your friends for help making decisions like “should I bake a white cake or chocolate cake with my tequila buttercream?” It was founded by the team that sold social media marketing tool CoTweet to ExactTarget (acquired by Salesforce) in 2010 and is backed by Freestyle Capital, Baseline Ventures, and First Round Capital.

Another startup, Askem, participated in Microsoft’s Israel accelerator program and lets people snap a photo and get multiple-choice options for answering.

Side does not focus specific, in-the-moment queries and is designed to generate recommendations algorithmically, rather than soliciting them from friends. The team said the goal is more about self-discovery and creating a user profile that can yield meaningful results.

The long-term vision is to build out Side as a recommendation API (application programming interface) to allow retailers to provide suggestions to each individual potential customer, and for targeted marketing.

Ruben said that being so young is an advantage because the founders don’t need much sleep and are extremely eager to learn. At the same time, he said their inexperience means they sometimes can’t iterate and adapt as quickly as they may like and people are skeptical of their long-term commitment.

Whether or not Side attracts significant traction or revenue, the founders have their entire careers ahead of them. And hopefully somewhere among all the startup-building, they will find a little time for sleep and beer.