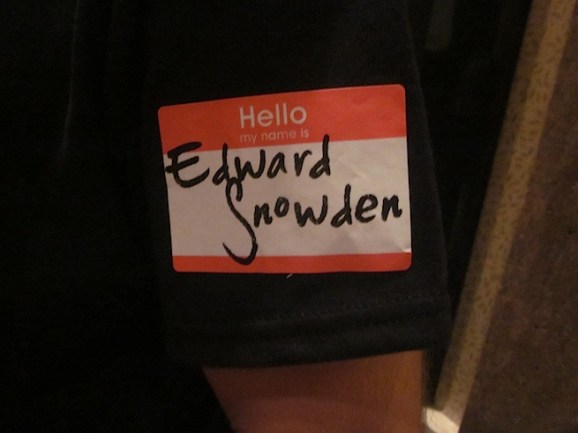 The privacy-focused e-mail service that former-NSA contractor Edward Snowden reportedly used was shut down today after the founder left a note saying he’s gagged from talking about why it’s now offline.

Ladar Levison, the founder of Lavabit, expressed anguish after having to decide between becoming “complicit in crimes against the American people” or shut down his business nearly 10 years in the making. Founded in 2004, Lavabit was dedicated to protecting the privacy of those who used it. The website explained that its initial concerns came from the way Gmail uses people’s data to serve them relevant advertising.

Among other efforts to keep user data secure, Lavabit encrypted e-mail before saving them to its servers, which would be attractive to those wishing to send relatively secret communications.

In early July, Snowden applied for political asylum in Russia after releasing top-secret information about a U.S. government surveillance program called PRISM. At the time, Tanya Lokshina, the deputy director of Human Rights Watch, relayed information about Snowden’s decision to the New York Times. She suggested that he sent an e-mail to political officials requesting they meet with him regarding the asylum application. That e-mail, according to Lokshina, came from a Lavabit address.

Levison explained in the letter that for the last six weeks he has been dealing with the “events” that led to this decision, none of which he can legally discuss.

“I feel you deserve to know what’s going on — the First Amendment is supposed to guarantee me the freedom to speak out in situations like this. Unfortunately, congress has passed laws that say otherwise,” he said.

If we are to believe that Snowden actually used his service, these events likely were connected. Check out Levison’s letter in full below:

I have been forced to make a difficult decision: to become complicit in crimes against the American people or walk away from nearly ten years of hard work by shutting down Lavabit. After significant soul searching, I have decided to suspend operations. I wish that I could legally share with you the events that led to my decision. I cannot. I feel you deserve to know what’s going on–the first amendment is supposed to guarantee me the freedom to speak out in situations like this. Unfortunately, Congress has passed laws that say otherwise. As things currently stand, I cannot share my experiences over the last six weeks, even though I have twice made the appropriate requests.

What’s going to happen now? We’ve already started preparing the paperwork needed to continue to fight for the Constitution in the Fourth Circuit Court of Appeals. A favorable decision would allow me resurrect Lavabit as an American company.

This experience has taught me one very important lesson: without congressional action or a strong judicial precedent, I would _strongly_ recommend against anyone trusting their private data to a company with physical ties to the United States.

Defending the constitution is expensive! Help us by donating to the Lavabit Legal Defense Fund here.