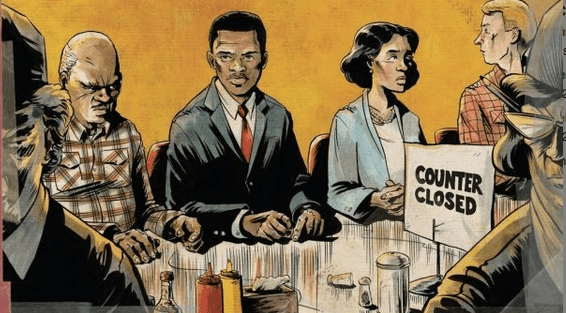 ComiXology, a platform for publishing digital comic books, has just made available the first of a 3-volume series on the life of  John Lewis, a civil-rights leader and current U.S. Congressman.

The digital book comes out just in time for the 50th anniversary celebration of the historic 1963 March on Washington on August 28, where Martin Luther King, Jr. delivered his famous “I have a dream” speech.

In the video below, a couple of ComiXology employees interview Rep. Lewis alongside Andrew Aydin, who handles telecommunications and technology policy for Lewis. Aydin, a comic book fan, co-authored the book with Rep. Lewis.

The 124-page book sells for $10 and is available on ComiXology’s website and on its apps for iOS, Android, Kindle Fire, and Windows Phone.

“Reliving the confrontation at the bridge did take me back,” Rep. Lewis says of the book, referring to the pivotal 1965 confrontation between civil-rights activists and police at a bridge in Selma, Alabama. “It was somewhat painful, but at the same time I was very pleased and delighted to … tell the story for another generation, a generation of young people who have the courage to get in the way, to get in trouble, and to push and pull in a peaceful, orderly, nonviolent fashion.”

During the interview, Aydin makes a nerd-tastic connection between comic book fans, Battlestar Galactica, and the Civil Rights movement.

“All of this has happened before, and all of this will happen again. … You have to learn from history to figure out where you’re going in your own life,” Aydin says.

He goes on to talk about how the comic community is very accepting of difference. “We’re all sort of misfits. And it’s such an accepting community … it’s a community that accepts everybody.”

Lewis interjects, using a word favored by Dr. King, rather than “misfit,” he says, “We’re all a bit maladjusted.”

“The country changed in 50 years,” Lewis said. “It’s a different country. It’s a better country. And we are better people.”