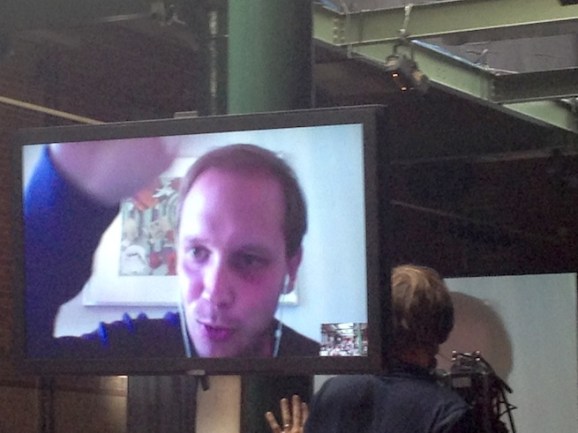 MALMÖ, Sweden–Pirate Bay cofounder Peter Sunde made a virtual appearance at Swedish media conference Media Evolution yesterday, in which he shared his thoughts on piracy, privacy, and his various projects dealing with both of those subjects.

One thing Sunde made perfectly clear during his talk? He doesn’t consider himself part of the entrepreneurial culture.

“I actually hate being called an entrepreneur,” Sunde said via a Skype video call that was broadcasted across multiple screens during the panel. “Most entrepreneurs, when they become successful, they turn into idiots… It’s the same thing with rockstars and entrepreneurs: big money and big egos.

“So I think we should stop celebrating entrepreneurs and just celebrate innovation instead,” he said.Sunde didn’t reference anyone in particular, but it’s easy to find some examples. For instance, wealthy entrepreneur Sean Parker of Spotify and Napster, who is arguably relevant to the new era of digital music for a completely different reason.

Sunde’s views on entrepreneurs themselves might seem a bit odd when you consider the list of wildly popular services he’s been involved with over the last several years. He’s cofounder of the decade-old torrent sharing site The Pirate Bay, cofounder of crowdsourcing platform Flattr, and most recently, cofounder of NSA-proof messaging app Hemlis. But then again, Sunde’s status as a fugitive for violating various copyright laws means he’d likely never see money from one of these projects anyways — making his motivation remain solely on making those projects really good.

A lot of what he mentioned in his talk has been touched on before in other Q&A’s or talks. I’ve embedded the audio from his talk via Soundcloud below, but here are some of the high points: