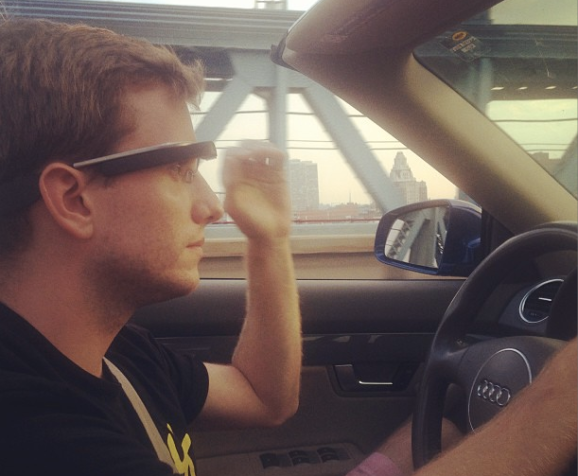 When Glass Explorer Chris Barrett first received Google Glass, he walked out of Google’s New York offices, got into his car, put the augmented reality headset on, and asked Google a very important question.

“OK Glass, is Glass illegal to wear while driving?”

The search came up negative, so Barrett kept Glass on and drove out of the parking garage. Since then, he’s racked up 1,500 miles with Google Glass on the road while driving and now feels that Google Glass is perhaps the most important new technology in automotive safety since on-windshield displays.

Regulators aren’t so sure, of course.

Officials in the UK are working to enact regulations to ban Google Glass from the driver’s seat of a car, and the state of Virginia opened that discussion back in March of this year. As always, regulators and legislators are concerned about any new technology added to the driving experience that could cause a distraction.

“I really feel that Google Glass will save lives,” he told me this morning. “I hope it comes in under Bluetooth and wireless headsets. … I don’t see this as being any different than an on-windshield display that auto manufacturers have been putting in cars for years.”

His argument is simple. Despite massive regulation, stiff fines, and clear evidence of danger, American adults and teens continue to drive and text, or drive and check notifications on their phones. Glass has the real potential to change all of that today, and to get even better in the future.

“I started realizing I’m not touching my phone as much,” Barrett said. “Like many, I had a bad habit of picking it up at a red light, or even when driving. Now, as I’ve been wearing Glass, I put my phone down and concentrate on driving.”

The key difference is, of course, that with Glass, notifications come right into your visual field. You don’t have to take your eyes off the road, you don’t have to pick up a device, and you don’t have to touch any virtual or real buttons. In addition, if you choose to communicate with others while in the car, it’s easy to do simply with audible commands — much like telling a Bluetooth-equipped car to phone your spouse.

In fact, Google could embrace this in the future commercially-available model with a special driving mode that perhaps holds all but the most important notifications from loved ones or key business associates until red lights, or knows the local speed limit and informs you when you’re going faster. In addition, Barrett said, Glass could connect to your car wirelessly and provide key data on its functioning, range remaining in your tank or battery, and highlight local landmarks.

“As the summer went on I realized how important a tool Google Glass is for driving,” he said. “Now I’m wearing it every single time I get in the car.”

Car manufacturers are starting to integrate Glass into their vehicles, with Mercedes and Tesla having starting projects around integrating with Glass. The question is, will those apps be usable by drivers, or simply by passengers. Barrett thinks drivers need Glass and that governments should allow it.

“I don’t think Glass will get banned in cars,” he told me. “I think it’s important that government and regulators embrace new technology … these will become people’s go-to glasses for driving.”

I asked Google for its perspective on Glass and driving, but a Google representative declined to comment.