The legal blowback against struggling mobile ad giant Velti has begun — and investors, not app developers, are leading the charge.

Filed in the U.S. District Court for Northern California, the suit alleges that the incomplete information Velti reported led to its stock trading at an artificially inflated price. In other words, the plaintiffs say, Velti defrauded its investors.

Velti has yet to respond to multiple requests for comment on the allegations, but news of its financial struggles shouldn’t come as a surprise.

Over the past few  years Velti has had a seriously hard time collecting payments from its ad network partners — many of which were in the cash-strapped countries of Greece and Cyprus.

These collection issues are in large part responsible for the payment problems reported by developers using Moblix, Velti’s mobile ad exchange. According to claims from multiple affected developers, Velti is months behind on payments, which some speculate run as high as $30 million. (Velti has since announced its plans to sell Mobclix, which should help its current money situation if it finds a buyer.)

While Velti has publicly acknowledged these concerns, it turns out that it wasn’t entirely forthcoming with how bad the situation was. Alongside its second-quarter earnings last week, the company announced its decision to write-down over $100 million in accrued receivables — news that sent its stock sliding 66 percent to $0.34 per share. 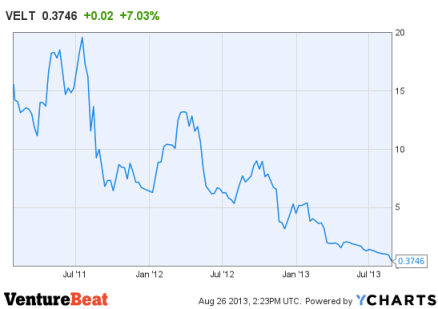 Because it took Velti so long to report the true magnitude of its problems, plaintiffs say they were given a false and incomplete idea of Velti’s financial health. This cost them money.

Gregory Linkh, an associate at Glancy, Binkow & Goldberg in New York City, said that the damages sought by the case’s plaintiffs “have yet to be ascertained.”

So what’s next for Velti? While some brave stockholders are likely still holding out for the company’s long-promised turnaround, others say that the company’s financial situation can only result in it going bankrupt. We’ll see how it plays out.