This is a guest post by Levo League CEO Caroline Ghosn 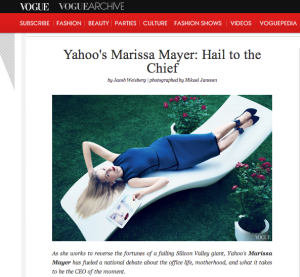 Above: A screenshot from that Marissa Mayer Vogue shoot

There is a new kind of CEO in town, and she looks a little different than we are used to. For starters, she is a she — and she may wear Toms to the office, and have a baby on her hip while she writes emails and makes dinner. In another scenario, she may be lying upside down on a chaise longue with rush red lips and big diamond earrings. It is a different image than the one we are used to and for some, it is an unacceptable one. But the mindset for what a typical CEO looks like needs to shift.

This rejection of a new kind of CEO was made clear this week when the media erupted after a Vogue spread featuring Yahoo CEO Marissa Mayer was released. How could she look like a movie star in photos and also work in technology? Why didn’t they show a picture of her writing code? Would we have seen this type of reaction if a male CEO had been lounging in that chaise?

But many also defended Mayer. “Smart women can be beautiful,” said Jen Bosse of the blog, Defining My Happy. “Beautiful women can be leaders of industry. Women should not have to succumb to societal pressure dictating what they are ‘allowed’ to be and do.” Why do so-called feminine pursuits and business prowess and capability have to be mutually exclusive?

Reactions to photos like this show that the perception of what the CEO portrait looks like is still pretty rigid, but female CEOs, though they are still in the minority, are changing the profile of the typical CEO everyday.

They are young. Jennifer Hyman and Jennifer Fleiss, the founders of Rent the Runway, were in their mid-20s when they created the “Netflix of fashion”. That company is now worth $200 million.

They are not traditionally educated. Sophia Amoruso, the 29 year old founder of Nasty Gal, had just dropped out of photography school when she started selling vintage clothing finds on her MySpace page.  The company earned $100 million in revenue last year. Alexa von Tobel, CEO and founder of Learnvest, dropped out of Harvard Business School. Tory Burch didn’t formally study design or business.

They are devoted mothers. Helena Morrissey, CEO of Newton Investment Management in London, is a mother of nine children. Dubbed the City Supermum by the British media, when she returned to work after her first baby was born she was passed over for a promotion because her boss doubted that she wouldn’t quit or wouldn’t move up. She proved his assumption wrong by joining Newton, where she steadily rose up the ranks to the very top while also managing to have eight more children.

They work on their terms. Levo League investor, Sheryl Sandberg made headlines last year when she admitted during a video for the Makers series that she left work everyday at 5:30 pm, no matter what. There is no doubt that Sandberg doesn’t get her work done or doesn’t exceed performance expectations. The video went viral.

They are leaning in. Some may say that these glamourous CEOs like Mayer and Tory Burch are not helping women and yet a recent survey by the Center for American Progress and Elle magazine found that more than half of the women interviewed say they speak up frequently in meetings. “Women report they are leaning in and staying forward, and they’re seeking raises and promotions,” says Robbie Myers, Elle’s editor in chief.

They are reaching out to other women. Female CEOs are not pulling up the ladder behind them. Levo League’s roster of mentors is changing the CEO ideal everyday by offering their insights, lessons, experiences and their motivation with young women all over the world. Without the open knowledge sharing and mentorship of incredible fellow CEOs, such as Gina Bianchini of Mightybell or Susan Lyne of AOL Brand Group, I would not be where I am today on the entrepreneurship learning curve.

These CEOs are working hard so that someday when a powerful woman poses for a glamorous photo, her abilities and motivations won’t come into question.  Women are working to change perceptions, so that you’ll notice her abilities, not the dress. 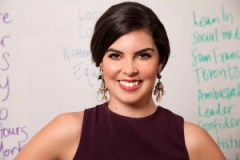 Caroline Ghosn is Co-founder and CEO of Levo League, a thriving community of young professionals, role models, and innovative companies taking Gen Y by storm. Ghosn graduated from Stanford University in 2008 with a B.A. in International Political Economy and Environmental Economics. She is the first woman in her family to graduate from college, and has been passionate about entrepreneurship and social change from an early age.