Microsoft’s $7 billion deal to buy Nokia’s devices and services business was the inevitable outcome of a years-long courtship.

For Nokia, the move was a much-needed bailout from its burning platform, and for Microsoft, buying Nokia’s devices gives it a near Apple-like control over its smartphone ambitions.

But while Microsoft has high hopes for the future of Nokia and Windows Phone, one question remains unanswered: Will a Microsoft-made Lumia really be any more successful than one made by an independent Nokia? Two struggling mobile companies don’t automatically become successful when combined, after all.

Microsoft, however, is a bit more confident.

In the post announcing the news, Microsoft CEO Steve Ballmer and former Nokia CEO (and new Microsoft CEO frontrunner) Stephen Elop say that the deal will let Microsoft “realize the full potential of the Windows ecosystem,” which in its own way confirms what most of us already know: While Microsoft has put a lot of money behind Windows Phone so far, the platform is still struggling. Something’s got to change. 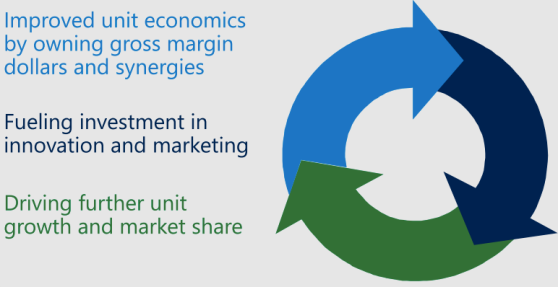 The most obvious benefit with Microsoft’s acquisition is that with Nokia, Microsoft has full end-to-end control over both the hardware and software of Windows Phone.

This not only helps it avoid problems like ones that resulted from the transition from Windows Phone 7 to Windows Phone 8, but it also makes Microsoft’s smartphone business look a lot more like Apple’s (or perhaps more like Google’s).

In other words, if Microsoft really wants be a “devices and services” company, it has to have full control over the devices and the services that make up its ecosystem. We’ve already seen this with both the Surface and Xbox, two hardware lines with the entirety of Microsoft behind them. So it’s an obvious move for Microsoft to do the same in the smartphone realm.

But where does this leave the rest of Microsoft’s Windows Phone partners? While Nokia has controlled the lion’s share of Windows Phone sales, companies like HTC, Samsung, and LG have also supported the platform. Does the Microsoft/Nokia deal leave them out in the cold? Not exactly, says the company.

The money plays a role here as well. Under its current deal with Nokia, Microsoft makes less than $10 per device sold, as it confirmed in its presentation discussing the move. By bringing Nokia’s devices in-house, that number spikes to over $40 per unit. That could translate to an extra $45 billion per year by 2018, the company estimates.

One Windows Phone, one marketing message

And then there’s the marketing question. One of the bigger problems with the Lumia line since the beginning is that there has often been a misalignment in marketing between Microsoft, Nokia, and carriers that ultimately sold Nokia’s devices. This was something Nokia has been painfully aware of, as Nokia North America sales and marketing chief Matt Rothschild hinted to VentureBeat back in July:

Still, it’s clear that we need to continue to work in this area. There are two established, comfortable options and we’ve made a concerted, bold decision to bring a third choice to consumers. It’s going to take time, consistent investment, and heavy lifting to continue to build that. And it won’t happen overnight or with a single product.

By buying Nokia’s devices business, Microsoft will have a whole lot more control over how the devices are marketed — something that’s sure to be extremely valuable for the company as it continues to carve out its niche in the smartphone market. Now that Nokia’s smartphones are a part of Microsoft, any future Lumia will be made in alignment with Microsoft’s business strategy, not Nokia’s.

Still, none of this is certain to change the near-term prospects of Windows Phone, a platform that has a lot of promise but not much backing from consumers so far. Microsoft’s move may be a bold, $7 billion gamble, but if you believe Steve Ballmer, perhaps it’ll all be worth it in the end.