Alchemist Accelerator is an accelerator program that specializes in helping startups make money. The entrepreneurs are expected to build sustainable, revenue-generating businesses, even in the nascent stages.

Alchemist only selects startups that are focused on selling to businesses, rather than consumers. That’s what differentiates the program from Y Combinator, TechStars and the rest, according to founder Ravi Belani. Belani is a faculty-member at Stanford University, and is also well-connected with investors from the top venture firms.

VentureBeat reported on Alchemist shortly after its launch. Since then, the program has already enrolled four classes of business to business (B2B) startups, with the latest launching at demo day today. The startups receive $30,000 in initial funding, which is a larger sum that Y Combinator startups.

Alchemist aims to provide seed funding to about 48 startups each year. After that, the startups are typically in a strong position for a first round of financing. Already, venture firms like Andreessen Horowitz, Citrix’s Accelerator, True Ventures, Greylock Partners, and Founders Fund have invested in the Alchemist startups.

“Alchemist is slowly but surely becoming an institution of its own in Silicon Valley,” said Deepak Jeevan Kumar, an investor at General Catalyst, who attended demo day. Kumar told me he was particularly impressed with Airpost, one of the eight startups that presented today.

The program continues to attract talent, especially among entrepreneurs who want to make money — as well as disrupt, innovate, and all the rest.

Enterprise-focused startups continue to perform well in both the public and private markets. In the tech sector, the majority of the companies that filed for an initial public offering this year were enterprise-focused, a trend that is set to continue. 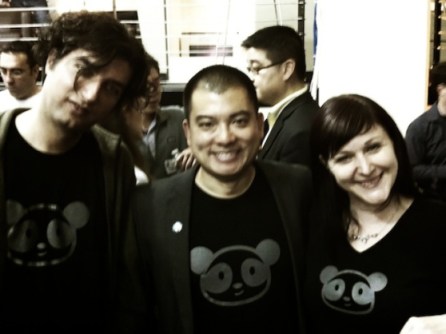 Above: CRM tool SocialPandas graduated from Alchemist, and went on to raise $1.5 million

The current class has been working on products for six months (longer than the majority of accelerator programs), and have received introductions to dozens of potential customers and advisors. They all have functional websites, and are testing their products in the market. The technology ranges from customer relationship management (CRM) to 3D printing.

The tagline is “put social to work.” Discoverly is a tool to discover opportunities in your connections, both personal and professional. Its founding team includes Ted Summe, who formerly worked in corporate development at Salesforce.com

Airport provides technology that helps you discover all the cloud services being used in your organization and implement advanced controls to actively enforce information security policies.

SkuRun provides a technology to monetize retail surfaces. It leverages mobile and real time bidding. The founders formerly worked at Joost and Microsoft.

BrightFunnel describes itself as “Splunk for CMO’s. It provides revenue insights across marketing and customer relationship management data. The CTO was an early employee at Trulia.

Synata is a single search bar to make it easy to find what you need inside of any of your cloud services. The tagline is “things go missing in the cloud. Synata shows you where they are.”

Omnistream is a customer relationship management system for luxury retailers in China. It is designed by serial entrepreneurs, specifically with the Chinese market in mind.

The company is developing a cross platform modeling tool for 3D Printing. It is specifically designed with the game industry in mind, and has an office in Amman and San Francisco.

Simply put, NextInput is 3D Touch technology for next-generation user interfaces. It was the first company to develop a underwater operable touch system for smartphones, digital cameras, and other applications. NextInput’s team is based in Atlanta.