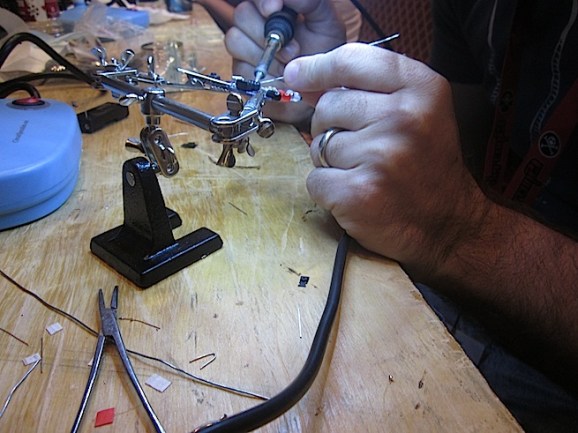 “Starting a venture is hard — actually, if people knew how hard, they wouldn’t do it — but starting a hardware venture is three times as hard,” said angel investor and Txtr CEO Christophe Maire at the second Hardware Berlin event held at The WYE.

The audience of founders, engineers and makers listened intently as Maire opened the night with a keynote speech about the ups and downs of his experience in hardware entrepreneurship, which includes his work on Nokia N95 and building two Txtr eReaders. Here are three importance pieces of advice to consider if you’re thinking of venturing into the realm of hardware.

“Rather than going through retail or having to pre-order a large number of devices, launching online only is probably the safest strategy that I would go for,” he said. “Had we had something like Kickstarter at the time we planned our first eReader device, we probably would have done very well.”

“Before Amazon came to the market, we had the great idea that digital paper was the future. So we designed our own connected hardware device,” recalled Maire as he spoke about his experience building Txtr’s first eReader. “It was probably one of the most sophisticated eReaders. The only problem is that it took us about a year and a half longer than we expected to compute it.”

Eventually, Amazon launched the Kindle. Maire said this brought prices down and made it impossible to convince anyone to pay the price Txtr had set despite additional features. “So, simplify. Write this out large and in red,” he advised.

“Had we at the time when we planned it designed a simplified hardware, we probably would have been the first to market and might have had a chance.”

3) Combine hardware with a service