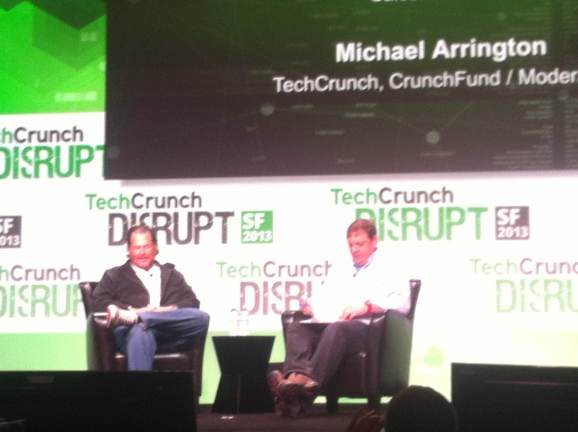 Benioff, Salesforce.com‘s colorful and outspoken CEO, got spiritual onstage at TechCrunch Disrupt today, telling stories about his personal “journey” and how Jobs is the “guru” of the tech industry.

“There would be no Salesforce without Steve Jobs,” Benioff said. “Steve took an early trip, went to India to go to ashram, and had the incredible realization that intuition was his greatest gift. Steve Jobs’ message for all of us is to ‘actualize yourself,’ and this is a message that we need to embrace. Entrepreneurs cannot be afraid to take this key journey.”

Benioff spent most of his fireside chat waxing poetic about his relationship with Jobs and their interactions over the years. Benioff worked for Apple back in the ’80s, and Jobs was an early mentor for him. He then attended the University of Southern California and went on to work at Oracle. He left Oracle to found Salesforce.com, where Oracle founder Ellison was also a mentor and an early investor.

Benioff said that he would call Jobs or go to visit him for help when he was growing Salesforce.com.

“Steve once told me there are three things you have to do,” he said. “Number one, you have to be 10 times larger in 24 months or its over. Number two, you need to get a huge client on your service like Avon. Number three, you need to build an application economy. I said, ‘What’s an app economy?’ He said, ‘I don’t know, but you better go figure it out.'”

Benioff likened this advice to receiving a “koan,” or a zen poem from a Japanese monk. These poems are obscure and intended to guide recipients into meditation to ponder their meaning.

“I ultimately realized that Salesforce needed not just to be an app but a platform with a marketplace or directory of apps that are public,” he said. “So I registered appstore.com, and we rolled it out and called it App Exchange.”

Then in 2008, Jobs told Benioff to visit Apple for an announcement he was making — “the most important thing Apple has ever done.” Jobs announced the Apple App Store.

“This was something we talked about internally for years at Salesforce,” Benioff said. “Steve announcing it was like this grace for us. It was a very spiritual moment. At the end I walked down to Steve and said I’ll give you a gift, the App Store trademark.”

Jobs is a reverential figure in the tech community, and Benioff said that Apple is still struggling to reconcile itself to his absence.

“The most important thing for Apple to realize is that they are still trying to be [Jobs],” he said. “Steve always said, ‘Be mindful and project the future.’ Apple should acknowledge that on a regular basis.”

When he wasn’t reminiscing about the past and discussing his personal “journey” and “path,” Benioff also mentioned that Ellison is a “phenomenal executive” and denied ever saying anything negative about Ellison. The two have and had notoriously tumultuous relationship, but they recently announced a surprising partnership between Salesforce and Oracle.

He also talked about the importance of philanthropy and his admiration for Gates.

“There is no one in our industry I admire more than Bill Gates right now,” Benioff said. “He has saved 10 million lives. But the only way to save Microsoft right now  — because the company is such a disaster — is for Bill Gates to come back and push the reset button. He would have to take a break from saving world, but his phenomenal wife can do it for a while.”

Salesforce.com runs a charitable foundation, and Benioff has personally donated massive amounts of money to good causes. He is also a vocal proponent of companies of all sizes, even startups, adding a charitable mission to their business. He said that “making dough” is good, but giving back some of that money is even better.

Salesforce, by the way, is amid its first $1 billion quarter and is experiencing 30 percent growth.

“This is something the industry hasn’t seen in a longtime,” Benioff said. “It is made possible by huge changes going on — shifts in the cloud, social, and mobile are causing incredible disruption through the enterprise software industry.”