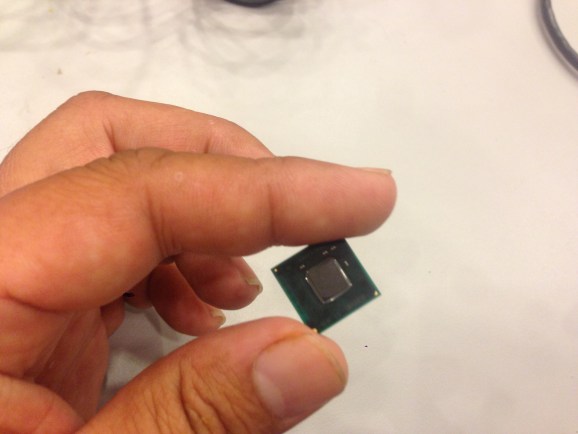 SAN FRANCSICO — Chip makers are chasing each other into the market for chips for wearable devices and the “Internet of things.”

Intel’s Brian Krzanich, the chief executive of the world’s biggest chip maker, joined that party this week as he announced Quark, a chip aimed at wearable gadgets, at the Intel Developer Forum. During the past couple of weeks, other players such ARM, Imagination Technologies (owner of the MIPS and PowerVR chip families), and Qualcomm all made similar pronouncements.

“The market potential for wearables and the Internet of things is huge,” said Rob Enderle, an analyst at Enderle Group. “We are at the beginning of having to instrument almost everything, and it’s going to enable everything from robotics to self-driving cars. It’s going to be several orders of magnitude larger than mobile. Whoever gets it is pretty much going to own the future. They will pretty much be the next Intel.”

Intel, of course, wants to be the next Intel. The common observation among the competitors is that just as PCs will give way to the larger markets of tablets and smartphones, so too will wearable devices eventually dwarf the number of mobile devices. ARM stole a march on everyone by creating a chip architecture that was built for low power, and it took a big lead in tablet and smartphone chips. Intel sees a similar land grab opportunity in the wearable chips, and it doesn’t want to get caught flat-footed as it was in the transition from PCs to smartphones.

“A lot of people are chasing the same markets at the same time, working on things like how you connect the Internet of things,” said Mike Feibus, an analyst at the consultancy TechKnowledge Strategies.

Intel’s chip is a small device that comes from its heritage of making embedded processors, or older chips such as its Pentium that are refashioned for the industrial controls or appliances market. Such chips have had to become more powerful to handle tasks such as playing the videos at gas station pumps. In that sense, the dumb devices of long ago are becoming smarter and more connected. That is leading to the increased processing power of embedded chips, creating an opening for Intel.

Krzanich said Intel’s Quark is a beefy 32-bit processor, compared to many older 8-bit embedded processors. The single-core, single-threaded processors was a fifth the size of an Intel Atom processor and it uses a 10th of the power. The first product in the family, dubbed the Quark X1000 SoC, could be in production later this year. The x86 chip will have to be secure, power efficient, flexible, and reliable. It is expected to be smaller than 10 square millimeters and operate on 10 milliwatts.

ARM had the edge in smartphones because of its low-power processor technology. Intel had historically emphasized high performance and didn’t care about power. For much of the past decade, however, Intel’s engineers have been trying to bring down power consumption while maintaining high performance.

ARM would seem to have an edge in wearables again, as its heritage is in low power. But Kevin Krewell, an analyst at the Linley Group, says that that other processor architectures are becoming more competitive.

Imagination Technologies chief executive Hossein Yassaie said it is a myth that only ARM can do low-power processors. Intel has steadily been chipping away at its power consumption, using the same techniques that are available to ARM. After a decade of building such expertise and reprioritizing its designs for power efficiency, Intel is now positioned to do something like Quark.

But the wearable market is still to be defined. Google Glass has fired the excitement and imagination of people around the category. But the device costs $1,500 now and it has a 1Ghz dual-core processor. That kind of processor and that price go together. But many wearables might need far less cost, power consumption, and processing power to be practical. If you’re measuring the water content in the micro-environment of a vineyard, you have to be able to run for months or years on a single battery charge. And so many chips are needed in such environments that they may need to cost something like 50 cents.

Since Intel can get $100 a chip for its PC processors, it’s not clear why it wants to even bother with low-cost wearable chips. But if the volume becomes high enough, then everyone will be drawn into the wearable chips market. That appears to be what everyone is anticipating.

“The next Intel should get the majority of this work,” Enderle said. “It will have to be flexible in efficient. It could be for a driver’s seat that automatically configures itself for you.”

Clearly, Intel is going after ARM with Quark. ARM’s Cortex M and Cortex R processor IP compete in the same space. Qualcomm has its own ARM-based silicon in this space, and it is already making processors for its recently launched Toq smartwatch.

Noel Hurley, ARM’s vice president of marketing and strategy in the processor division, said in an interview with VentureBeat that ARM’s technology can already be built into wearables and internet of things applications.

“We’re already there and quite comfortable with our position,” he said.