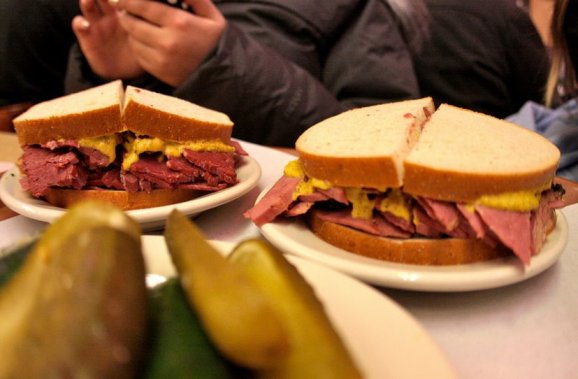 Want a classic pastrami on rye from Katz’s Deli without having to travel to New York City? Goldbely can make it happen.

The Y Combinator alum announced today that it has raised $3 million in seed funding led by Intel Capital. Not surprisingly, the company says it will use the funding to land more partnerships with popular American restaurants. Goldbely currently offers items from renowned local eateries like the Salt Lick BBQ in Austin and Ben’s Chili Bowl in Washington, D.C.

“We are democratizing the gourmet food industry,” said Goldbely cofounder and chief executive Joe Ariel in a statement. “Our mission is to empower great local food purveyors and restaurants by introducing them to a national audience. Using our platform, these vendors can reach new customers, market to them effectively, and streamline the shipping process.”

Think of Goldbely like a national version of a service like Seamless or Grubhub. The company offers national delivery capabilities, similar to Omaha Steaks, to any local restaurant. Shipping times and costs vary depending on the restaurant. Goldbely certainly won’t be much of a help for satisfying spontaneous cravings, but if you want to cater a party with authentic local cuisine from across the country, it could be a lifesaver.

I first talked to Goldbely’s Ariel in New York City last year, but the company has since moved to San Francisco. Other investors in its seed round include Y Combinator, 500 Startups, Dave McClure, Tim Draper, Ace & Company, and Funders Club. The company previously received some funding from friends and family.