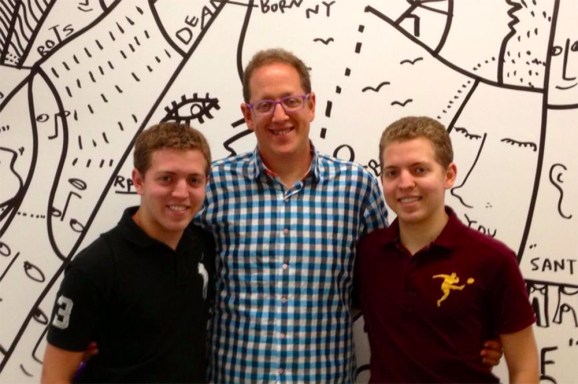 SAN FRANCISCO — At TwilioCon today, Vonage co-founder Jeff Pulver gave a fascinating keynote about ham radio, getting fired, and a run-in with the FBI — and how all that gave birth to modern voice over Internet protocol technology.

Pulver is widely recognized as a pioneer of VoIP technology and was the chief writer of the FCC’s first VoIP ruling.

His current company is a Twilio-based iOS and Android app called Zula, created to enable better communication among teams.

“It was amateur radio that unlocked by connection to voice over IP,” he said. Talking about being a lonely Long Island kid, Pulver spoke about a cable-company tour with his uncle. Using a ham radio, his uncle communicated with a queue of people all around the world. “He had discovered the cure for loneliness: It was this box.”

Licensing, however, was a three-and-a-half year process for Pulver. But since he obtained that license at the age of 12, he said, “I haven’t shut up since.”

As a teen, he started building software to track his ham radio logs. In college, he started a spreadsheet company and ended up doing financial analytics on Wall Street.

In February of 1995, the first Internet phone became available from a company in Israel. “I was amazed that this software would let me talk to people just like the radio,” he said. “I spent a lot of time building rapport with people. … What I discovered is that voice is an application.”

That fall, he decided to created free calling from computer to computer. The following spring, 300 computer companies went to the federal government to block companies like Pulver’s. He created a coalition to fight back, and ultimately, the coalition won.

As Pulver’s reputation grew in the budding VoIP community, he eventually got fired by his company and started running conferences about technology. He also created the concept of the minutes exchange for the buying and selling of telecom calling. And that, dear reader, turned into Vonage.

As the dotcom crash rocked our industry, Pulver filed a petition for new regulation on telecommunications. “Every phone company in America filed an opinion on why the petition should not be granted,” he said. “Then, the DOJ and FBI went after me.”

In an unmarked building in downtown Washington, DC, he was questioned on computer crime. “They thought I was harboring Al Qaeda. … I stopped and said, ‘Look, if you want to use this to catch the bad guys, you can have it.’ I left with two new friends in the government.”

After that, Pulver was responsible for the FCC ruling that has led to the past nine years of regulation-free VoIP apps and services.

“If anyone would have told me how impossible this was, I wouldn’t have gone, I wouldn’t have done it. It’s easy to say no; it’s harder to be nuts. .. Most of my mistakes have happened when I over-thought.

“It’s been an interesting ride. … Being able to develop things freely, I’m in love with that.”