Google Wallet is officially available for iPhone, iPad, and iPod Touch for the first time this morning.

The search giant’s mobile wallet will allow you to send money to friends, just with their email address, as well as store all your credit cards, debit cards, loyalty program cards, and coupon-style offers.

To start, the service appears to be U.S.-only — you can only send money to American friends, and the app does not yet appear in other countries’ app stores.

Google Wallet comes complete with a PIN for personal security, plus 24/7 fraud monitoring, and you can disable the Google Wallet app without physical access to your phone if you’re afraid it’s in the wrong hands. Once you start using Google Wallet, the company says, you’ll be able to send money via Gmail.

And when you use Google Wallet, you get automatic purchase protection from Google. 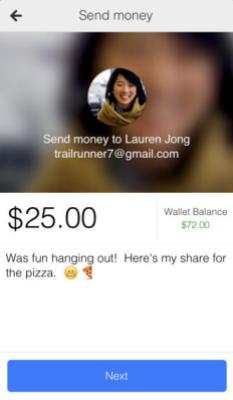 Interestingly, the app’s version number is 2.0.10206, even though this is the first release of Google Wallet on iOS. That might be a big clue that Google has had to rework, add, and edit its app to meet Apple’s app store guidelines, or simply to secure Apple’s approval.

Apple, of course, has no digital wallet solution — unless you count Passbook, which is a single place to store digital tickets, coupons, and loyalty programs. There’s clear overlap between the two apps, but Passbook has nothing to do with money — at least not today.

Only a couple of months ago, Apple applied for a patent on a combined virtual currency and digital wallet technology that would store your money in the cloud — iCloud, I presume — and allow you to pay for purchases in-store. But the company hasn’t actually launched any shipping product with that technology.

Which begs the question … what’s Apple’s move when it comes to digital wallets?

The fact remains, however, despite Google’s move to extend Google Wallet beyond Android, that the massive digital wallet leader is PayPal. No other company even comes close in terms of awareness and adoption.

Perhaps this new app is one of Google’s attempts to change that.