Chip maker Freescale and Oracle are announcing an initiative to create standards for gateways that can deal with a flood of data from devices associated with the “Internet of things.”

The Internet of things refers to the vision of instrumenting everyday devices with sensors and connectivity so that they can send data over the Internet that can be crunched in excruciating detail to gain information about our homes, businesses, or environment. Many chip makers are preparing for the big semiconductor market that will materialize as companies deploy their networks for the Internet of things. Rivals such as Intel, Qualcomm, ARM, and Imagination Technologies are among the companies competing to make chips for the internet of things. 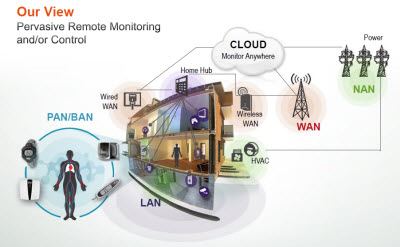 The first step is to create a service platform that standardizes the delivery and management of Internet of things services for home automation, industrial measurement, and manufacturing. Oracle and Freescale will collaborate closely to make it happen and will provide more details this week at the JavaOne conference in San Francisco.

Freescale views the Internet of things as next step in the industrial revolution, enabling the creation of entirely new markets by instrumenting the world. But one of the biggest barriers will be the lack of a secure, standard, and open infrastructure for delivering Internrt of things services.

More than 95 percent of the things that make up the Internet of things — such as battery-operated biometric sensors on farm animals, rugged sensors on the sides of bridges, or moisture and soil chemistry sensors in fields — are resource-constrained and operate on batteries for years at a time.

Freescale, one of the largest makers of chips, and Oracle, the big software company, will jointly create software combined with a converged gateway, dubbed One Box.

“This is not just going to be about machine to machine communication,” said Kaivan Karimi, the executive director of global strategy and business development for the microcontroller group at Freescale, in an interview with VentureBeat. “It’s about machine to nature or machine to infrastructure.”

The companies will deal with specifications like how often a sensor should send data back to a central computer. For instance, a sensor might tell a farmer when a plant needs water, so that the plant doesn’t get over- or underwatered. If you turn on a sensor every hour, it will burn out its battery quickly. For sensors in the field, you probably want the battery to last for maybe 10 years.

Freescale and Oracle will figure out how to balance such things.

“The Internet of things puts intelligence in places that didn’t exist before, extracting information, and then making things better,” Karimi said. “But you don’t want anyone to hack this data. It’s not stealing your identity or credit card. It’s like leaving your back door open, or allowing people to hack the traffic lights or utilities in a city. The stakes are higher.”

The OneBox will consolidate data collected from multiple appliances from multiple Internet of things service providers. It will gather the data and dispatch it where it’s needed. The platform simplifies and secures the delivery of internet of things services to users in a home, business or other location. The idea is to move data around in a speedy but network efficient manner. The job is not easy, since tiny electronic sensors that make up the Internet of things will have to be both low-cost and secure. It will also have to connect to the Internet over a network that is a lot cheaper and faster than the cellular wireless network that we’re using so much today, Karimi said. 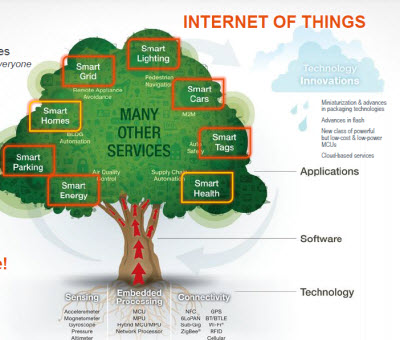 Above: Freescale internet of things ecosystem

“The One Box platform represents a significant milestone in the evolution of the Internet of Things, establishing a standardized and secure platform for service providers to quickly and cost-effectively introduce differentiating IoT services,” said Geoff Lees, the senior vice president and general manager of Freescale’s MCU business. “Freescale’s extensive portfolio of secure, scalable embedded processing solutions is ideal for enabling this critical bridge to common standards for IoT infrastructure.”

The One Box is based on Oracle’s open source Java Embedded software framework and embedded security processors from Freescale processors. Heavy-duty processing could be done inside the One Box, or it could happen inside the web-connected data centers, or the cloud.

The platform will support applications in smart energy, smart meters, telehealth, and other smart home services. The home version of the One Box runs Java embedded software and is powered by a Freescale i.MX6 series app processor built on the ARM architecture.

The technical challenges are big, as the system will require a 32-bit processor, but the power efficiency has to be much better than in any other sorts of devices.  That’s why Oracle and Freescale have been working for around eight months to make the platform a reality.

“As a longtime embedded processing pioneer, with an unusually clear vision on how to use their technology to accelerate innovation and ease-of-use, Freescale has the expertise and insight necessary to help Java evolve and thrive in the IoT era,” said Nandini Ramani, the vice president of development for the Java platform at Oracle. “We have already made progress in a number of areas that we are proud to showcase together at JavaOne San Francisco 2013, and look forward to expanding our collaboration to cover a broad range of products and activities aimed to position Oracle and Freescale as leaders in the Internet of things.”