The race is on to make our cars smarter. Car makers are exploring connected systems, and a bevy of startups aim to take advantage of the rise of smartphones and ubiquitous cellular access.

Enter Zubie, a company that has a gadget to track your car’s diagnostics and trip data, which relays all of that information to your smartphone. The gadget, the $100 Zubie Key, takes advantage of the onboard diagnostics (OBD) port, which is in all cars built after 1996. 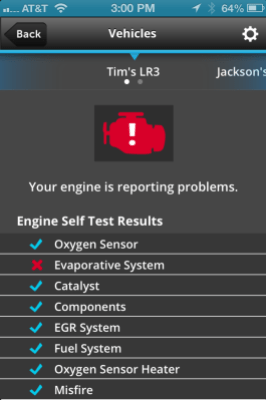 Zubie’s big innovation is in its connectivity: Rather than relying on Bluetooth to talk to your smartphone when it’s in range, the Zubie Key sports a cellular connection, which opens up the ways you can use it.

Families, for example, could purchase several Zubie Keys to keep track of all of their vehicles. It can provide some peace of mind for parents, since the Zubie Key can detect a vehicle’s current location, trip history, and potentially troublesome events (like instances of hard breaking, rapid acceleration, or the first time your child drives at night).

“Our mission is simple: We want to make driving safer, easier, and less expensive,” said Tim Kelly, Zubie’s chief executive, in an interview with VentureBeat.

The company was originally incubated by Best Buy, and Kelly came on to lead early this year after his stint as Network Solutions’ CEO (which included a $405 million acquisition by Web.com). Kelly also led Sprint’s mobile division, which puts him in a decent position to understand the complexities in releasing a cellular-connected gadget.

In addition to trip-tracking, Zubie can also send alerts when your car needs repairs. (No more guessing why your check engine light has turned on.) The company claims that its service will also get smarter the more you use it, similar to Nest’s learning thermostat or Google Now. Zubie also provides a driving score for each driver based on 30 metrics, like acceleration, speeding, hard breaking, and more. It’s a quick way to get a sense of your own driving habits. 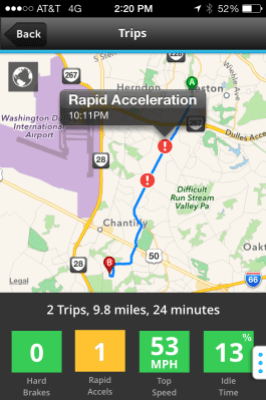 Buyers of the $100 Zubie key get one year of Zubie’s T-Mobile-powered wireless service, but you’ll need to pay $100 a year for additional service. Other connected car services like OnStar typically cost around $30 a month, so Kelly believes Zubie is offering a much better deal.

We’ve seen many devices try to take advantage of your car’s OBD port over the years, but they typically involved periodically yanking out the gadget and connecting it to your computer. NYC startup Dash recently made a splash with its OBD gadget and attractive app, but it relies on Bluetooth to talk to your phone. Zubie’s cellular connectivity makes it the most seamless way to access your car’s diagnostic information, without much effort on your part.

Navin Ganeshan, Zubie’s vice president of product management, showed me his family’s Zubie-connected fleet, which consists of cars all over the country. He was able to see specific trips his kids in California took, and he also had an alert for something that needed he needed to fix in his own car.

Zubie’s iPhone app is admittedly rough-looking at this point, but the amount of data the company is able to gather impressed me. Zubie says an Android app is on the way.

Looking ahead, Zubie is planning to offer extensive repair intelligence, so you can get a sense of how much a repair will cost in your area, offers and discounts if you choose to make some of your data available to companies, and theft and tow monitoring.