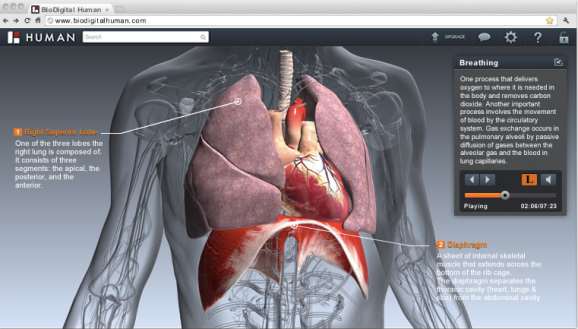 BioDigitial wants to completely change the way we understand and explore the human body– but first it needs some cash.

The company, which creates interactive 3D models of the human body, has raised a $4 million round led by FirstMark Capital and joined by the NYU Venture Fund.

While the BioDigital Human Platform only launched last year, it’s already amassed over a million users, including doctors, medical students, and even yoga instructors. “That really opened our eyes. This is not just niche tool,” FirstMark Capital managing director Amish Jani told VentureBeat.

BioDigital owes a large part of that success to the greater adoption of 3D technologies like WebGL, which allows any supported browser to render 3D models embedded in webpages. (Internet Explorer, the last WebGL holdout, finally added support for the API with IE 11.)

But while BioDigital is already popular for its 3D models, CEO Frank Sculli says that his company wants to be so much more than that. Rather than be a simple destination site or suite of apps, the BioDigital of the future will be a platform with an API that developers can build on top of.  “People are already approaching us with imaginative ways they want to work with our models,” Sculli said.

To use the most obvious example, imagine if searching “heart” on Google returned an embeddable, interactive 3D model from BioDigital — just like searching for something the “Empire State Building” returns detailed information about the structure.

And then there’s the healthcare industry side of things. Right now doctors are using BioDigital’s 3D models to explain tough medical concepts to their patients, but Sculli says he envisions a time when those 3D models can be customized for each patent and embedded in their medical records.

Sculli says BioDigital plans to use its new funding to help grow the team, which he says has a few “voids.” The company’s next effort will be a more robust iPad app, which Sculli says is the first step BioDigital’s quest to move beyond just a destination site.