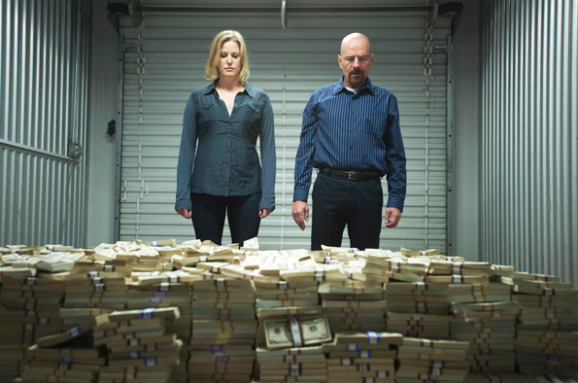 That's a whole lot of cash.

And speaking of the Breaking Bad series finale, we’ve got a lovely little smattering of funding stories for you today.

Video-gaming powerhouse Twitch managed to scrape together a respectable round, and all (presumably?) without the aiming laser pointers at their VCs. The foodies at HelloFresh put together a nice bowl of lettuce, as well, hold the ricin.

But the biggest deal of the day was a health care company that went all in on Obamacare. Why bet the farm on a controversial piece of legislation? we asked. “I did it for me,” the CEO replied.*

Without further ado or spoilers, here’s the conclusion to an epic September’s investment activity.

San Francisco-based Evolent Health just raised $100 million in its second round of funding, an unprecedented sum for such an early-stage health care startup. Evolent is a particularly attractive prospect for investors, as the Affordable Care Act (ACA) comes into effect. The health exchanges open for enrollment tomorrow. Evolent has aligned its messaging with the goals of the ACA, claiming to provide software and services to help doctors move from fee-for-service-based care to outcomes-based care. Read the full story on VentureBeat.

Livestreaming has become a cultural force in the video game business, and that explains why streaming leader Twitch is announcing today that it has raised $20 million in a third round of funding. The investors include Take-Two Interactive, the publisher of big hit Grand Theft Auto V. San Francisco-based Twitch now counts 45 million monthly unique viewers for its streams, which show videos of players’ sessions in real-time over the Internet. Read the full story on VentureBeat.

Big-data startup Dataguise has taken $13 million in its second round of institutional funding. The company offers services for data privacy-protection and compliance intelligence for sensitive data assets. THis money comes from Toba Capital and an unnamed “leading electronic conglomerate.” Dataguise is based in Freemont, Calif., and was founded in 2006.

Power management company Varentec has raised another $8 million — with a little help from Bill Gates. The San Jose, Calif.-based company wants to decentralize today’s power grids, a reinvention that creates faster, more efficient systems at reduced cost. The latest funding round, which Khosla Ventures led, joins the $7.7 million Series A round it raised last January.
Core to Varentec’s effort is “Edge of Network Grid Optimization” (ENGO), its hardware-software solution that, in real time, monitors and controls the voltage going over systems. The company calls the technology the “eyes, brain, and muscle” of its future decentralized power grid. Read the full story on VentureBeat.

HelloFresh, a Berlin, Germany-based company that aims to make tasty, healthy meals at home as effortless as possible, has nabbed another $7.5 million to boost its market share in the U.S. and elsewhere. This is the third round of financing for the company, which has now raised a total of $20 million. The Moscow-based VC firm Phenomen led the round, and Vorwerk Ventures and Holtzbrinck Ventures participated. Rocket Internet and Investment AB Kinnevik are existing investors. Read the full story on VentureBeat.

Is it a blog? Is it a microsite? Is it yet another WYSIWYG editor soon to be lost in the mists of digital history? We’ll go with a “yes” on all three! Tackk has scraped together a $1.2 million round for… that thing it does, which can be broadly described as “content creation.” The (app? site? service? sure!) also has social sharing and following features. This is Tackk’s second round of seed funding; we’ll see if the product makes it to a Series A.